At the Phoenix Airport 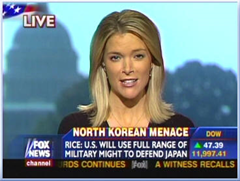 I was as irritating as ever yesterday when my buddy Jeff spotted Fox News's Megan Kelly strolling through the airport. I probably would have never noticed her acting like a regular person looking for the carousal her luggage would hopefully appear on after a long flight from the east coast.

So like a giddy school girl at an Ashton Kutcher sighting, I cornered her right there in Baggage Claim, held out the current theology book I'm reading, and demanded an autograph, "because my wife will never believe this."

She wants to know my name.

But I don't tell her it's spelled weird because I was born in the sixties so she goes ahead and mis-spells it B-R-I-A-N and I let her because she's Megan Kelly from Fox Cable News. I mean, Bill O'Rielly asks for her opinion.

Besides, I can always go to court later and have my name changed so that she won't be wrong.

This will probably be Megan Kelly's most forgettable experience ever.

Yeah--I just came from her blog, and she just couldn't say enough about you!

i think you girls are picking on me. the comments the dudes are leaving on facebook are much more sympathetic.

The only thing better about her than you Bryon is her hair style.
sorry....