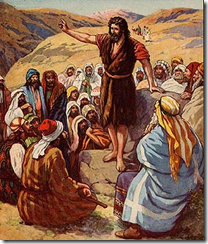 John the Baptist’s ministry came under the scrutiny of the religious establishment. Overly dramatic spiritual actors came out to see what John was doing to draw such a crowd. They wanted to profit from it or put a stop to it. They don’t warm up to John or his message when he greets them by calling them a bunch of snakes.

“Brood of vipers! Who warned you to flee from the wrath to come?”

Jesus had better names for these religious fakers than John had. One I like is “son of hell.” Jesus says: “Yes, how terrible it will be for you teachers of religious law and you Pharisees. For you cross land and sea to make one convert, and then you turn him into twice the son of hell as you yourselves are.”

Snakes these religious people were.

If you were a young Jewish dude and excelled in sacred studies and discipline, it was more likely that you’d be card-carrying Pharisee rather than any other religious sect of the day. Pharisees were mainstream and well financed. They had tight theology that clearly defined who was in and who was out. They separated themselves from the rest of the population. Most of the population was out. But God was pretty much obligated to show the Jews favor. Jews were the children of Abraham. John said God could make “children of Abraham” from rocks.

Jesus later made examples of the Pharisees in the stories He told. In one story, Jesus makes a point to contrast a sinner’s humility against a Pharisee’s self-righteousness. At one Pharisee’s house, Jesus points out that a sinful woman who washes His feet with her tears will be remembered wherever the Gospel is preached. The Pharisee, by the way, is remembered as a rude host. Pharisees are noted for making up rules no one can keep; they come up with laws that rob a widow of any money she has coming; they make loud prayers on street corners, make sure everyone greets them respectfully, and never touch anything or anyone determined to be unclean.

They suppose conforming to their own rules gets them into Heaven.

Jesus calls them sons of Hell.

If you thought the Pharisees were a little too hard-lined and heavenly-minded, Sadducee may be the party for you. They were more concerned with the here and now. Angels, demons, and the after-life were not the things thinking people embraced. The poor, uneducated, and misguided commoner placed his hope in these wishful phantoms. Influence, affluence, and creating one’s own destiny were the religious tenets of the Sadducee. Hold these values close to your heart close and one day maybe you’ll be a part of the religious ruling class endorsed by the government; a state sanctioned Sadducee.

No resurrection. No angels. No spirit that lives beyond the grave. Men perish when the body expires.

Vipers are a species of snake with a flat, poison-filled head. When a person is bitten, he swells up immediately, and then keels over and assumes room temperature. The word conjures up the image of cunning and malignancy; the viper is the symbol of envenomed malice.[1]

These are religious leaders.

This is John’s baptism. He wants them to know that if they stepping into the Jordan, their wickedness needs to stay in the river where people are repenting. Leave the hypocrisy and leave the acting. Bear fruit. Bear the fruit of one who has turned his back on the world and worldly rewards. Bear the fruit that comes from following God.

When one follows God, one’s position in the religious pecking order isn’t important. Loving people and introducing them to Christ is.

Religious men were preparing first place for themselves and leaving their job undone.

Technorati Tags: John the Baptist
Posted by Bryonm at 9:57 PM

Hmm...the Sadduccees must have inspired a song: "Imagine there's no heaven/It's easy if you try/no hell below us/above us only sky/Imagine all the people/living for today...."