What can I say about Pastor Bob Coy? The man can bring it. He delivers the Word sprinkled with comedy and a healthy dose of application. The pastor of Calvary Chapel Ft. Lauderdale, the church he planted over twenty years ago with two or three families on the Fort Lauderdale beach in the fall of 1985 now ministers to roughly 18,000 people. CCFL plants churches (including the one where I serve as an assistant pastor), sends out countless missionaries around the world, and has established a Bible College, Christian School, school of worship, and probably one or two endeavors I've overlooked (vastly understated).

Pastor Bob posed this question:
What is your life worth...
...to the accountant?
...to your kids?
...to your wife?
...to the person whose life has been changed when God used you as His instrument in that person's life?

Think about that for a minute.
Notes to self:
What's your net worth, Bryon? Is it a positive or negative number? I know that I only matter about once a year to my accoutant right around 15 April.

And I hate to say it, but sometimes I feel like only matter to my kids when they need something. I know that realistically that's not true. But everybody needs a couple of teenaged kids in their lives to keep them humble with truthful feedback peppered with teen-angst.

I mean more than I realize to the beautiful and charming Susan. And I definitely under-appreciate her.

To the one the Lord has used me to influence. Well, I can't believe the Lord would ever entrust someone's soul to my (our your) care.

Pastor Bob points out that the Lord delights to use people that would fail without Him. That's me to a "t".

Philippians 1:27
Only let your conduct be worthy of the gospel of Christ, so that whether I come and see you or am absent, I may hear of your affairs, that you stand fast in one spirit, with one mind striving together for the faith of the gospel... 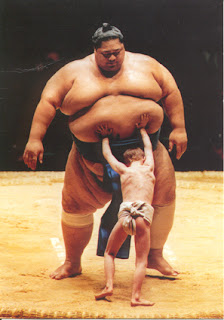 Bob went on to tell the story of his experience grappling with a Sumo wrestler and standing fast. He flashed the picture to the right up on the screen. He said it was him. You buy that? Love the skivvies...

When Jesus had a chance to move, He stayed... on the cross.

So what am I afraid of? Failure? Or sucsess? Success is a heck of alot more work than failure.

point 3...
Behaving belief>>>>we trust the Lord, we obey; that's how we know our belief is true.
love; diligence; self-control; obedience; patience; these are the results of behaving my belief.

Notes to self:
At this point, Pastor Bob began to talk about the heat he's taken for launching a major building program - one of the biggest ever. I have some thought about this that I want to cover in a different post. I was thrown off track a little, but the bottom line here is behaving your belief. Are you serving God? Are you in His Word? Are you surrounding yourself with men that speak into your life (both mentors and brothers that will take you to task when necessary)? Then what's the problem? Actually, I don't know if that's exactly what Pastor Bob was trying to say, but that's what I took away from it? Who am I, though? I gotta answer for me.

point 4...
C.S. Lewis quote: "Too whom God uses greatly He must hurt deeply."
>>>>With a weakness God will draw you to Himself.

Then Bob assigned us some homework:
Read Fox's Book of Martyrs and quit your crying!
Posted by Bryonm at 4:20 PM

Awesome recap! You could have saved me a trip up there. :)

Bob is such an awesome communicator.

"the Lord delights to use people that would fail without Him."

Great quote! And I'm counting on its truth, because I don't think He could have chosen a less-likely person to advocate for children in poverty.

Count on it, Vicky. The Lord is using you greatly.

Thanks for commenting so often...

rudy garrido said: Bob is such an awesome communicator.

yeah, he's a great communicator but only if one is Christian...from my own personal lack-of-communication with him..and I'm not Christian