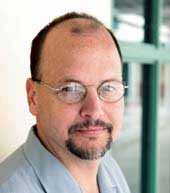 Today is a sad day. As the webmaster at Calvary Chapel Jupiter, I took Mike West (at his request) off the "Our Team" page. Mike is moving on to bigger and better things in radio in South Carolina.

Mike has influenced our community significantly as station manager at WayFM and as a leader and staff member at Calvary Chapel Jupiter. Even though he will be leaving our staff and be removed from our website, he will be immortalized on this blog. Below is Mike's bio cut and pasted from our website.

Mike grew up in Western Kentucky and attended the University of Kentucky. He accepted Christ in 1989 at age 32 after witnessing Christ transform his wife, Mary. Mike went on to be a leader in Bible Study Fellowship for 6 years and says “studying God’s Word changed my life.”

He and his wife Mary have been married since June of 1978 and have two children. Justin, a Lieutenant in the U.S. Air Force, flies C-17s out of Charleston, South Carolina, and Lyndsey studies communications at Palm Beach Atlantic University. “Our greatest joy is seeing both of our children live out their faith.”

After working 15 years in the radio industry, including being the General Manager of Christian radio station 88.1 WAY-FM in West Palm Beach for 4 years, Mike joined the Calvary Chapel staff in July of 2005.

The Wests have been attending Calvary Jupiter since 2001 and Mike says, “Calvary Chapel Jupiter is the Bible-based church we were looking for.”