Chris Tress is one of my heroes. When (if) I grow up, I want to be like Chris. Chris is a missionary at Urban Youth Impact. I received a Christmas Card and his newsletter in the mail today. What's printed below is from his newsletter. Good stuff. It can also be read over on the WayFM radio show blog.

"I can't believe we are still celebrating Christmas...the birth of Jesus. I've been thinking about the fact that Jesus did everything wrong from man's perspective to market His movement.

Now think for a moment...if you were going to start a movement, how would ou go about doing it?

If it were my choice, I would have been born in the best hospital... Jesus chose to be born in a smelly barn. My parents would have been of great wealth and power... Jesus was the son of a carpenter and had a teenager as His mom. I would have grown up in Rome, which was the greatest city on earth at the time...Jesus grew up in Nazareth and the people of the day said, "Can anything good come out of Nazareth?" I would have attended the top university of the day... Jesus never went to college. I would have written a book with a detailed outline so my movement could get under way... Jesus never wrote a book or published an article. I would have ran for a public office so as to better promote my ideas... Jesus never ran for or held an office, in fact, one time He hid himself when the people wanted to make Him king. I would have used the best marketing strategies... Jesus never manipulated or bargained with anyone to follow Him. As a matter of fact, He made sure that His followers knew that they would be presecuted because they followed Him. I would have networked with the most powerful people of the day... Jesus was often rubbing shoulders with the outcasts of society, (the poor, the sick, the prostitutes, the drunks, etc.) If I knew that I was going to eventually have to hand my movement over, I would have chosen the most influential and well-educated people for my board of directors... Jesus chose twelve ordinary men, of which, the majority of them were uneducated. 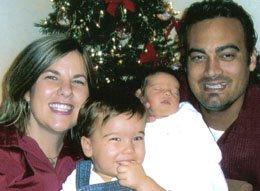 Jesus' ministry lasted only three years. During this time, He was often homeless. Eleven out of the twelve guys He raised up for leadership deserted Him when He was crucified on the cross. This movement should have never gotten off of the ground...it was doomed from the beginning. Alexander the Great conquered the world by force, but I have yet to meet any of His followers. The Persian, Babylonian, Roman empires ruled the world in their day, but have come to nothing. Can anyone explain why this man, who did everything wrong form human perspective, still has almost a billion followers scattered across the world two thousand years later??? He must be who he claimed to be because there is no logical reason for the kingdom of His to still be advancing.

As we celebrate the birth of Jesus Christ, may we come to a deeper understanding of how great He is. Jesus is Lord. Merry Christmas."
Posted by Bryonm at 12:52 PM

check the link for Strange New Products. U mite wanna change it.

Thanks for looking out for me on this. Strange can be a little too strange I guess...