Then he said to another, ‘And how much do you owe?’ So he said, ‘A hundred measures of wheat.’ And he said to him, ‘Take your bill, and write eighty.’ So the master commended the unjust steward because he had dealt shrewdly. For the sons of this world are more shrewd in their generation than the sons of light. “And I say to you, make friends for yourselves by unrighteous mammon, that when you fail, they may receive you into an everlasting home. (Luke 16:7-9)

I’ve struggled to understand this parable. Why does Jesus commend this steward? Read the story for yourself. This dirty dealer is smoking his boss’s books. When he’s about to get busted, he changes the accounts receivables and cuts deals with debtors to earn their favor because he knows he’ll soon be on the street. So what is so praiseworthy about this dude?

He uses all his influence to build bridges.

I know. He’s selfish. He’s just looking out for numero uno, but Jesus says he’s smarter than the “sons of light.”

Because the “sons of light” get so caught up in sniffing sin that they (we) miss the point. The Pharisees of Jesus’ day trashed Him through fault finding. The church, when not careful, can be guilty of the same thing when we see someone “straying” from “sanctioned” benevolence. Our pre-packaged processes hinder the work Christ commissioned us to do. We think we’re protecting God’s reputation and less work gets done. And I don’t think God is the One who suffers; the poor and marginalized do. 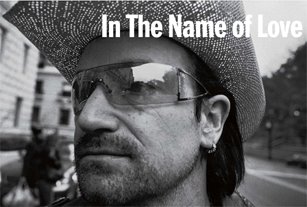 For this reason, I want to once again point to U2’s lead singer, Bono and the work he’s currently doing to ease suffering. He’s one “son of light” that is commendably shrewd and leverages all his influence to bless and build bridges in the name of Christ.

“Time said Bono's campaign to make rich countries address the debt of poorer ones has had an equally impressive impact on the world.

In 2005, "Bono charmed and bullied and morally blackmailed the leaders of the world's richest countries into forgiving $40 billion in debt owed by the poorest," the magazine said.

Bono has earned a remarkable number of political allies around the world and in Washington, where he has courted politicians from both major parties, Time said.

"Bono's great gift is to take what has made him famous - charm, clarity of voice, an ability to touch people in their secret heart - combine those traits with a keen grasp of the political game and obsessive attention to detail, and channel it all toward getting everyone, from world leaders to music lovers, to engage with something overwhelming in its complexity," it said.

Even archconservative former Sen. Jesse Helms had praise for the Irish singer.

"I knew as soon as I met Bono that he was genuine," Helms, who has allied with Bono on AIDS awareness, told Time.” [Click here to read the whole article.]
Posted by Bryonm at 5:30 PM

The dude just gets it. The church is eager to claim him because he's famous and a great poster boy for the modern church. I just hope we don't miss out on all the people that walk in and out of the American church who have the same heart as Bono and, like him, don't fit into the box of neat and tidy Christianity.