After riding motorcycles for twenty-five plus years, I'm finally on the road legally. I'm endorsed by the state of Florida.

Riding all these years without proper lisencing is quite a short-coming, I guess. It's one of those things I've permitted myself ignoring my consience or the example I've set. My sin is in the open. In fact, my sin found me out about two months ago when I broke the speed limit zipping through Stuart.

When I started riding, I don't even think a special license was part of the deal. If it was, it was taken seriously by no one (kind of like the 55 MPH speed limit or Howard Dean). At least not where I grew up riding in Northern California. I was stopped over twenty times and ticketed more than fifteen for a boatload of violations before I turned eighteen, but not having a motorcycle license was ever an issue.

"I can't believe they think they can take away our right to ride," said one old-school thinker who took the motorcycle skills test with me today. Three

of the four of us were there had recent run-ins with the law. One of us was a not-so-law-abiding-pastor. My sin is shouted from the rooftops.

I've had five bikes over the past twenty years. This one to the right is the one I rode to Florida was discharged from the Marine Corps in 1985. I took my wife on our first date on this bike. We rode to the beach in Ft. Lauderdale. I parked in a no parking zone it turns out. I arrived at my vacant parking space and watched my Suzuki swing from the tow trucks rigging. I was stranded on the beach with the beautiful and charming Susan for a couple of hours before I could arrange for a ride home. The rest is history.

The next bike I bought was a beater. I traded in an old Mustang without air conditioning and a fried clutch on that one. I don't think me or the dealer did any good on that trade. That bike didn't last long, but, for awhile, I was glad to be riding again after about six years of confinement to a four wheeled cage. I had this bike when I was going to Calvary Chapel Ft. Lauderdale in 1993. I gave this bike to a mechanic friend of mine who is now a pastor in Orange County, NewYork. I didn't do him any favors when I left this thing parked at the apartment he shared with his new bride.

I got my next bike shortly after Calvary Chapel Jupiter was planted. This was a sweet little 600cc V-Twin Yamaha. I had this bike for awhile before we sold it to raise money for a missions project.

The price of fuel soaring into the strasphere was the motivation for acquiring my current crotch rocket. The first version of this bike came out when I was in high school. Honda produces a line of motorcycles with a V-four engine configuration that revolutionized the entire motorcycle universe. This 1998 Honda VFR800 came my way via a Marine helicopter pilot. The young Marine captain meticulously doted over by this bike. It's seven years old with less than 7, 000 miles on it. 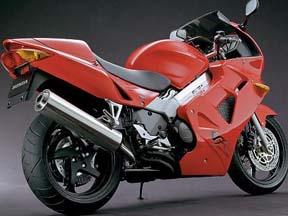 After nineteen years of marriage, my wife still likes to ride with me, and she's a good sport even when we get caught in the rain. She's not such a sport when she finds traffic tickets wadded up in my pocket. She refused to mount that bike until I'm lisenced. She's bent on making 100% legal. Probably not a bad idea.

The beautiful and charming Susan was happy to see my new license today. She pointed out that the picture makes me look my age. Thanks, babe. She looks forward to legally enjoying a ride in the next day or so.
Posted by Bryonm at 5:14 PM

Dude - your new make makes you look 20 years younger! I'm sure that your sin will be atoned for by the endless witnessing opportunities the bike will provide, especially when "Flyin' Bryon" pull sup to the local high school, Bible in hand...

that bike would be cool if it was green. the way god ment it to be.

ps. i bet your the type that has a sweet jacket but never wheres it.

scoob: I do have a sweet jacket. The sweetest. How did you know? And I wear it all the time. I'm breaking it in nicely.