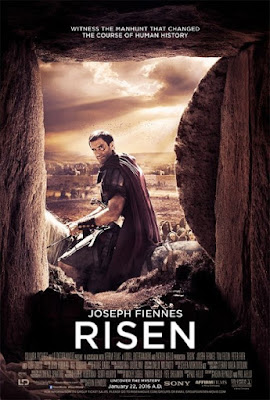 I know I’m not supposed to, but I have to admit it, I love a good fight. The new New Testament era movie Risen starts with a brilliant Roman era battle scene. This is where director Kevin Reynolds set the hook in me. The scene was not over done. It was a simple, believable depiction of a confrontation between rebels and Romans that made the conflict real rather than cinematic. This is how I knew I was in for a good yarn that would have the kind of tension we love to experience in a film done well.

In Risen, Joseph Fiennes plays Clavius, a high-ranking Roman Military Tribune serving directly under Pilate, the Roman governor who, against his better judgment, passed the death sentence on Jesus of Nazareth.

Clavius first comes in contact with Jesus after he is dead on a cross. In fact, it was Clavius, as our story’s narrative goes, that ordered Jesus to be run through with a spear rather than have his legs broken, ignorantly but importantly fulfilling prophecy. He also authorized Jesus’s body to be handed over to Joseph of Arimathea. At that point, Clavius thinks he is done with the man dubbed King of the Jews.

On the first day of the week, Clavius is summoned to Pilate’s quarters. The body of Jesus has disappeared from the guarded tomb and word is starting to spread that he has been seen alive. Clavius is tasked by Pilate to produce the corpse of Jesus to quell any potential uprising that could result from Jews looking for any reason to rally and rebel against the occupying Roman infiltrator. The tribune’s future is entwined with the political destiny of Pilate. Pilate’s future depends on the peace of Jerusalem which continually hangs in the balance.

The story fills in gaps in the New Testament gospels. Reynolds’ interpretation of events is believable when compared to what one reads in the Bible. There are guards paid off by religious leaders who have curried political clout. There are disciples in hiding. There is a repentant, yet well known harlot who has seen and touched the risen Jesus. We’re introduced to a doubting Thomas. We have the first Jesus I’ve ever seen cast that looks like an actual Jew rather than a chiseled, Western European super-model.

As Bible-based movies go, this is the first non-cheesy one worth seeing, in my opinion, since Mel Gibson’s Passion of the Christ. Hollywood has made the attempt to blow out theaters with big budget, special effects packed block-busters like Noah and Exodus: Gods and Kings and have mostly alienated people who read and believe their Bibles and left those indifferent about the Bible indifferent about these awkward interpretations.

Reynolds went in another direction with Risen. It was refreshingly free of special effects and computer generated landscapes. It relied on narrative and on-site cinematography that was stunning. And while the story is fiction, it honors the Bible by staying true to the textual narrative. It fills the movie-goer with the hope of resurrection and everlasting life. You really need to go see this movie on January 22, 2016, when it comes out. And bring a friend you’d like to see filled with hope.
Posted by Bryonm at 10:14 PM