A friend of mine asked me to write a piece for a document he’s working on for training missionaries. Here’s what I wrote: 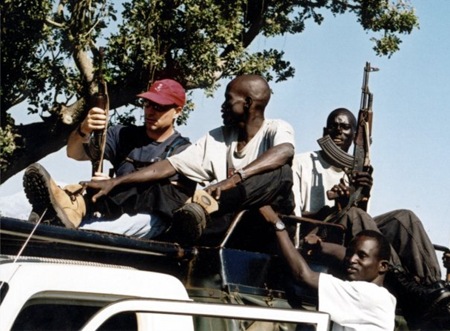 The times I've had to share the gospel on the mission field always happen when I'm least ready. "Preach the word! Be ready in season and out of season. Convince, rebuke, exhort, with all longsuffering and teaching." That's what the Apostle Paul told young Timothy. This is what he needed to have up and running in order to serve the church at Ephesus. Whether you feel ready or not, sharing the Gospel is something you'll always be expected to do. Always be ready to creatively connect your story and the gospel with the people you meet for one-on-one conversations or public addresses you may be called upon to give.

No matter where God directs your path as you head to the mission field, because you are an American (or are being sent by a church in America) you will be given a platform. You will be called upon to pray, speak to, or greet groups in public. Be the guy or girl known for sharing the hope of Jesus Christ with every opportunity.

The first time I went to Sudan, I worked with soldiers out at the front during the Sudanese Civil War. I was on a short term mission trip serving in a Bible college setting training chaplains who would be deployed to pastor soldiers. Our hosts had planned a special outreach to soldiers living and training in the bush. We took a generator, a movie screen, projector with a portable sound system, and the Jesus Film produced for the purpose of evangelism by Campus Crusade. We were heading to the most remote setting you could imagine in Africa's Equatorial Interior. The generator we brought was the only source of electricity in the region. Many of the soldiers had never seen a movie, I had been told. This was going to be a real treat for them.

The drive into the camp was surreal. It was near the border with Uganda and land mines were marked with flags and barbed wire all along the border. These soldiers were the most malnourished looking men I've ever seen. They wore clothes that were so thread-bare, you could see right through them. Most of the men wore cheep rubber sandals - the same kind you've probably used as shower shoes - and many were barefoot. The sun was setting and in the fading sunlight I thought I was on another planet. As I was given a tour, I was very aware of the landmines.

The time to show the Jesus Film was drawing near and a couple of our guys set up the gear and prepared to fire up the generator. But it wouldn't crank. The 1,500 men that had gathered to hear from the American visitors and watch a movie stood by watching and waiting with expectancy.

My host asked me if I would address the soldiers and encourage them.

So it's come to this. "Be ready in season and out of season." This is what "out of season" must feel like. If ever there was an "out of season" it was here in the bush in remote Sudan along the Ugandan border surrounded by landmines and soldiers dressed in rags.

I prayed with my team and then lifted up my voice and informed these men that I was an American, a former U.S. Marine. When I was called upon to serve my country by learning to shoot a weapon and fight with hand-to-hand combat, I began to fear what would happen if I died.

Would I see God?

I told them that is was then, at seventeen years old, that I began to read the Bible and learn about Jesus, the Man who was God. I shared the gospel with those Sudanese soldiers and called on those men to give their lives to Jesus. And many of those men took me up on the offer.

I had no idea when I got up that morning that this was how the day was going to end.