I was doing a little research for an article on LoveBags and thought I'd share this with you. It made my hair (the little I have) stand up.

THE OTHER SIDE OF SOUTH BEACH 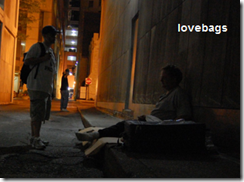 Over the years I've been down to South Beach a few times to check it out. I've always felt awkwardly out of place amid the perfectly tanned, toned and wealthy who frequent the high-end club and bar scene. However, the summer of '06 I began to go down there regularly with some friends – three, sometimes four nights a week. Our intent, however, wasn't to visit bars, clubs or restaurants.

Before we would go down, a group of us would make 200-plus peanut butter and jelly sandwiches (cookie and water included). Let's just say... I got pretty awesome at making sandwiches. We would meet up with some other people and proceed to bring dinner, PB & J style, to our many homeless friends who would hang at the beach along Ocean Drive.

Anyone who's been to South Beach knows that Ocean Drive is the hottest place to be, lined with it's high-end clubs, bars and restaurants. The beautiful people hang out there and meet other beautiful people and are, well, beautiful together. What most people didn't know is that across the street, less than 40 yards away, were hundreds of men, women and occasionally children who called the beach their home at night. It was on that side that I found beauty.

The homeless gladly welcomed us and became our friends. We knew some of their names, and they all knew ours. Some of them were crazy, some mean, most of them kind and all just wanting to be loved and listened to, reminded that they still had value and dignity. Sometimes we would tell them about Jesus, sometimes not; sometimes we would just listen, or leave a sandwich next to a sleeping body. We became known as the "Angels of the Night" and the "Peanut Butter Bandits."

It was over that period of six months on South Beach that my skewed perceptions of the homeless were changed. I began to really love them (You know it's love when you're tromping across the beach at 2 in the morning). There is one night that I distinctly remember. The cool breeze carried the louder than usual sounds and taunting smells of the weekend our way. I was standing under a palm tree and had just set a PB & J next to a sleeping man. His skin was stretched across his fragile body, emphasizing his sunburned cheekbones and sunken eyes; had it not been for his snoring, I would have been convinced that he was dead. With a heavy sigh I looked across the street and my heart broke. Not for the man next to me, but for the ones across the street.

They had no idea what they were missing.

In their search for meaning and pleasure they were looking in the wrong place – or rather, on the wrong side of the street. As I fed, loved and listened to these people, I experienced the kind of pleasure that I think those across the street were looking for. The ones we fed were poor, dirty, smelly, often drunk, mostly lonely... and all of them made in the image of God. And I began to see that image more clearly. I began to see Jesus more clearly. I felt so privileged to be on the other side of South Beach*.

There was one man in particular who God really used to inspire me to help launch what is now happening in Ft. Lauderdale. His name is Phil. When we met him he was holding a sign on the corner of a busy intersection in Miami Lakes. Over the next 6 months, our little group - of mostly poor college-age students - did everything we could to get him off the street; we pooled our money, bought him meals, let him sleep in our cars, paid for him to get his drivers license and countless other things. To be honest, it was sort of an experiment; could God really get a crack-addict off the street and transform his life? …And could he use a bunch of young, hopeful dreamers to do it?

Phil is now a strong believer, faithfully attends a church in Miami and has a wonderful ministry to the homeless out of his own home.

Walking through that transformation process with him did more in my heart than I realized; I saw for the first time that homeless people are just that: people. And that God can redeem their lives. For real.

I wasn't sure that everyone was as convinced as I that this would really work, so I asked one of my good friends, Bob, to come down to Miami one night and meet Phil. As he sat in a Starbucks and listened to his story over some lattes and an oatmeal-raisin cookie, his heart was as stirred as mine. Phil came up and shared his story with a few of our other friends... and they too were catching onto the vision.

At the time, I always carried bags of food (what we now refer to as "love bags") for the homeless in my car. We had proof that this whole redemption thing worked, a heart to help and a tangible thing that we could give to the homeless. So we dropped the PB & J's and launched love bags. And we discovered that we weren't the only ones with this heart –  there were many, many others.

The rest is history that is currently in the making.

*My little disclaimer…  I don't look down on people who go down to South Beach to party. I just think that the party is on the other side of Ocean Drive. But I do not in any way judge or think less of them.