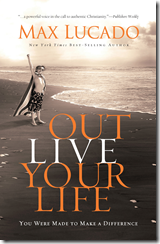 Get out? Or get in? You’ve heard the saying, “she’s so heavenly minded she’s no earthly good.” In a time when Christians in American culture myopically focus on their own heavenly evacuation, Max Lucado issues a challenge: leave something behind. Be a world changer.

In his newest book Outlive Your Life, Lucado celebrates the otherwise uncelebrated. In vivid prose, unsung heroes are brought to life as examples of people whose work benefits the world beyond the span of their lives. They’ve left a legacy behind that continues to point people to Jesus even though they’ve gone to be with Him.

Lucado is a master wordsmith. While so many writers churn out books to impress would-be pastors and academics, Lucado writes with the rest of us in mind. He tells the stories of Edith, Joe, Liz and Caleb. Edith is an eighty year old woman on a small, fixed income who lives to serve cancer patients. Joe and Liz are an average couple who make clothes for premature newborns. Caleb is a nine year old who took cash he squirreled away for a video game and challenged his dad and everyone else in his grade school rolodex to match it. The result: two clean water wells funded in impoverished El Salvador neighborhoods. Anyone can be a world changer, Lucado posits. “God doesn’t call the qualified. He qualifies the called.” The Bible is packed with odd and unsavory characters whose surrendered lives were used to change their generation and point people to God.

If you’re a discontented Christian, maybe it’s because you’re too aware that you are odd and unsavory, too. Take action. You’ll appreciate the distraction. Lucado's words exhort and encourage and challenge and cause someone to look well beyond herself and her limitations. It will inspire the Christian to build something that lasts into eternity while leaving God’s fingerprints here for now and tomorrow. This is how living becomes abundant.

Lucado is a next level encourager. As I thumbed back through the book, I was hard-pressed to pick a favorite chapter. Lucado comes at exhortation from multiple angles and develops themes that left me challenged differently than the chapter before it. Lucado demonstrates that anyone, even you, can contribute significantly to changing the world. As two or three gather in Christ’s name, God bursts onto the scene making Himself known, transforming everyone He touches. This is the key to unlock a heart that’s shut tight to the gospel.

Outlive Your Life impacts beyond its final chapter. The book includes tools and study questions perfectly designed for study in a community group. But beware, the book is not for those that want to just chat, pontificate, and converse. It’s designed for the friendships that are the by-product of taking action around mutual ministry. Outlive Your Life is written to be the catalyst to get your crew moving and doing.