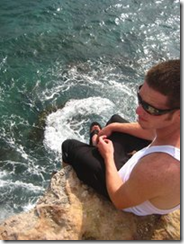 This week has been good. We had a team come in and most of the team had never been on a mission trip before. By the end of the week I was super surprised by how effective they were. They were servants, they were flexible, and were able to roll with the punches.

Dave and Darlys were in Fort Lauderdale for three days this week so it was just me leading. I think everything went really well. The majority of what we did this week involved the Children’s Program. We got a whole bunch of new supplies including a flannel graph kit that has like a billion bible characters that needed to be cut out. We spent most of our week traveling to our program sights and to orphanages to do the Program, prepare gospel bracelets (we ran out quickly), and cutting out the bible characters. The team this week was perfect for these tasks because each one of their hearts were set on serving the children of Haiti.

Children’s Program consists of skits, puppet shows, and English lessons using PowerPoint and the projector. Due to the lack of gas in the country this week, we did program without using the generator, PowerPoint, or the projector. Everything we did we incorporated into the puppet show. We did the English lesson, songs, and gospel presentation with the puppets. Our two main puppet characters are: Pierre (who is a black man puppet with short dreadlocks) and Jackie (the intelligent K-9). Kids that have seen the show chant the names Jackie and Pierre.

We traveled up to the mountains this week to a school in Cap Wooj. The school is one small room with about two hundred kids crammed into it. We came in, set up the puppet stage. These kids have never seen a puppet show before. They all watched silently with curiosity as we set up our monstrous stage.

After we did a few children’s songs, out popped Pierre. The soon as Pierre popped out from behind the puppet stage, every last child and teacher in the room began to laugh and cheer. The noise of their cheering was so loud, that it gave me goose bumps and made the hairs on the back of my neck stand up. The unexpected reaction of the children made me laugh really hard, I almost started crying of both laughter and joy. We are getting more and more requests from pastors to do Children’s Program at various schools, orphanages, and churches.

Towards the end of the week we did a little bit of construction. Some of the schools we visit are really in need of simple things like classroom benches, chalkboards, and school supplies. So we spent some time building children’s size benches with Dave.

I am very satisfied with the outcome of this week.