Greg Kappas also sent this story around in an email last week. Unfortunately, negative stories about Haiti and missionaries have been most popular in major media. If you have been praying for Haiti and for God to move there, this story highlights how the Lord has been at work answering your prayers. 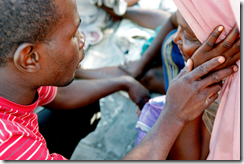 By Tristan Taylor
PORT-AU-PRINCE, Haiti (BP)—On a hot afternoon in a crowded, makeshift camp in Port-au-Prince, Jean Junior Cineas sits under a tarp suspended by a broomstick. He shares his faith with five Haitians left homeless after a Jan. 12 earthquake rocked their island nation. Soon, all five pray to receive Christ as their Savior.
The irony: Cineas is the son of a voodoo priest.

“It gives me joy to [share Christ],” says Cineas as he moves through the rows of tents. “I love to do that. It is my life.”
Cineas, 26, who prefers to go by Junior, has had plenty of opportunities to share his faith since disaster struck. He says voodoo’s influence has diminished and many Haitians are now calling on God.

“There are a lot of people who came to Jesus from voodoo ...,” Junior says. “I heard that during the earthquake, my father called on Jesus. He said ‘Oh Jesus. I know what You can do.’ But I wasn’t there. I do not know if it’s true.”
Some Haitians were awed by the power displayed in the earthquake — a power greater than anything they see in voodoo, Junior says. Others are grateful to have survived and want to give their lives to the God who saved them. It is rare for Junior to meet someone who does not want to be prayed for or to hear about his faith.

And much like the apostle Paul, Junior helps disciple those he leads to Christ. He plans to buy five Creole-language Bibles and return to the tent city to teach his five new friends to study God’s Word.

The transformation of Junior and many of his countrymen has not come easily, though.

Junior grew up in Croix-des-Bouquets, Haiti, in a family immersed in voodoo religion. Voodoo, a mixture of Catholicism and African Traditional Religion, is deep-rooted in Haitian culture. Like most voodoo priests, Junior’s father has multiple wives and so many children Junior doesn’t know them all. He was alienated from his family early on when his father’s wives rejected him and made him live in a peristyle (voodoo temple) in the yard.

Junior grew up not knowing his mother — she died when he was young — but he knew what his future held. He was expected to follow in his father’s footsteps and become a voodoo priest.

“I didn’t know [all that my father knew about] voodoo — but what I knew, I loved,” Junior says.

Much of his childhood revolved around voodoo and learning about its mysticism. But he also learned about the darker, dangerous parts — the belief in the ability to kill people by sending evil spirits.

“If you believe in it, you can understand it,” Junior says. “I used to understand it, but now I know Jesus. I know [evil spirits] cannot hurt me now, because I have Jesus.”

Junior’s future changed at age 16 when an International Mission Board missionary visited his father’s house. The Southern Baptist missionary told Bible stories, and Junior heard the Gospel for the first time. His father did not accept the stories and continued to practice voodoo, but he gave Junior permission to become a Christian.

“I love God so much,” Junior says with a smile. “How can I explain?”

He began ministering with the missionary, helping tell Bible stories to fellow Haitians. Before long, Junior’s father changed his mind — he no longer wanted his son to be a Christian. Junior’s new faith began causing conflict in his father’s house.

“It was very difficult for me,” he says. “I prayed for God to take me away from that family.”

When his missionary friend returned to the United States, Junior met IMB missionaries Mark and Peggy Rutledge in Port-au-Prince — and found a new family. He was able to escape tensions and voodoo activity at home by staying with the Rutledges on weekends. When Junior finished high school, their house became his new home.

“Peggy and Mark are my family,” he says. “I owe them everything in my life. Without knowing me, they took me into their home. I love them so much.”

Living with the Rutledges and their two daughters, Junior experienced a loving home with both a mother and a father for the first time.

“Peggy showed me what is mother,” Junior says in broken English. “Before, I didn’t know mother. I didn’t call anyone mother. Now I know what a mother is like.”

“Junior became like our son and a big brother to our girls,” says Peggy, referring to daughters Shannon, 14, and Abi, 11. “As he lived with us, we tried to disciple him and show him what a Christian family is all about. We saw so much potential in him. We grew to love him as part of our family.”

Junior also learned about living in a home that worships a loving God.
“He was part of our family Bible studies and often he sat in when we did Bible study with the girls [during their homeschooling],” Peggy says. “He began devouring God’s Word. He loved it. And like all of us, he went through rough patches in life, where God was teaching him things that might be difficult. But we kept encouraging him to always go back to God’s Word as the plumb line to measure by.”

As he grew in his faith, Junior discovered what it is to be part of God’s family, too.

“When I have Jesus, I am surrounded by family. For this, I love God,” he says.

But Junior still cares about his Haitian family and wants them to experience Jesus’ love the way he does. Still, tensions persist.
“I love my father. I really, really love my father. I want him to know Christ,” Junior says. “It is really, really difficult. I try to be wise and share Jesus with him, but after a while, he doesn’t want to talk to me anymore.”

Others in Junior’s family have been more receptive. He led a half sister to Christ last summer and is currently witnessing to another half sister.

And Junior’s relationship with his Heavenly Father is flourishing. He has a passion for evangelism and is a first-year theology student at Emmaus Biblical Seminary in Cap-Haitien, Haiti.

“He has such an exuberance for God,” says Peggy. “He feels called to be an evangelist, and he’s so gifted at it. He knows just what to say to people [when sharing his faith]. God really speaks through him.”

“There are many people who have not heard about Jesus,” Junior says. “Many people are lost. This makes me sad. I want to do what Jesus said. I want to evangelize. He gave us the Great Commission.”

Tristan Taylor is a writer for the IMB in the Americas.