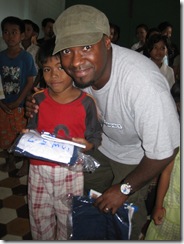 Recently I had a blast interviewing Proverb Newsome for the Good News (for an article due out in September). I haven't had much of a chance to get to know Proverb. I appreciate him because he's been a positive force of influence in my son's life over the past few years since they worked together at Urban Youth Impact.

I first met Proverb in passing about 15 years ago when I was serving in youth ministry at Calvary Chapel Ft. Lauderdale. We brought his band in to perform at a youth outreach event. I was the sound man. I was amazed by the humility of this group and how naturally they connected with the crowd.

He's gone international with his music and ministry. He was a key part of bringing the gospel physically and spiritually hungry Cambodia. He served as a grunt taking part in the distribution of TONS of rice as well as performing in venues small and large.

What I mean by small is he was able to intimately sit and sing and teach small groups of kids. He even taught them urban handshakes.

When I say large, well, one venue drew around ten thousand Cambodians that never saw an American rapper live. He had the old Cambodian women waving their hands in the air like they just didn't care.

When I say large, I mean massive; he was on TV getting into the homes of approximately 4.5 MILLION Cambodians on a live show singing songs with an uncompromising gospel message.

Did I mention my own son was this trip with him?

I haven't written about any Über Christ Follower's in a long time. I'm happy to lead off a fresh series with this man of God. Read more about his trip to Cambodia on his blog. And if you have any influence in your church, book him.

Thanks for the love Mr. Mondok.

you gots it coming...

I enjoyed the encouraging story. I also like rap so I'll be sure to check Prover out! Blessing to both of you.