While you and me have been hyperventilating over CEO's getting huge bonuses as if it was a sign of the Great Apostasy, other stuff has been happening on our planet.

Look at the pictures at your own risk. 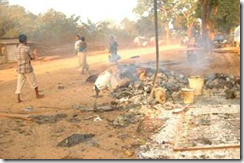 The Sri Lankan Army has continued its relentless march north and east of the island, gaining control of territory formerly held by the Tamil Tigers (LTTE).

The Red Cross warns that a humanitarian disaster is looming as the LTTE is holding a UN-estimated 200,000 civilians as human shields. Some have been killed as they have tried to flee into the area controlled by government soldiers.

Thousands more Tamil families suffer unhygienic conditions in overcrowded camps for the displaced where they will likely have to stay at least two years. Five Christian NGOs have government permission to work in the camps and a hospital.

Meanwhile, Christians are very concerned that legislation against "unethical conversion" in Sri Lanka has been presented again by the Buddhist majority. Activists accuse Christians of offering jobs or money in order to get people to convert to Christianity.

The Window International Network has issued an emergency prayer alert for Sri Lanka.

You sure make it hard for a person to feel sorry for themself when you go and post stuff like this. Thanks a lot, Bryon! :-P

"Activists accuse Christians of offering jobs or money in order to get people to convert to Christianity." Christians in India have been arrested in the past year, or more, on the same trumped-up charges. In one case, the men bringing the charges had been enrolled in the Bible school.