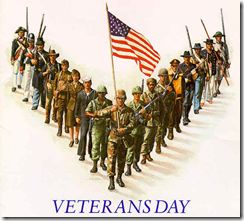 I can kill two birds with one stone here. I'm thankful for both veterans and my father's selfless example of service to this country. Walter Richard Mondok served twenty years in the U.S. Marines. His duties took him from Morocco, where he worked at the U.S. Embassy, to Saudi Arabia, to Viet Nam where he ran patrols and saw friends die. He returned home to a country that reviled him and spit on him.

He served in Japan and at the Marine Recruit Training Depot in San Diego, California. He served his last tour of duty here in Eureka, CA, where he opened up a local recruiter's station.

I'm proud of our veterans and owe them a debt of gratitude. But my father's service fills me with a sense of honor I can't adequately put into words. His family immigrated here from Czechoslovakia before Hitler's invasion of that country. He is the first generation of Mondoks born in this country, first in his family to complete high school, and first to join the U.S. Military. Two of his nephews and two of his children followed his example and joined the Marines right out of high school.

God bless your dad and all veterans, this day and every day. Thanks so much! I cling to the thought that most Americans are truly grateful.

Not sure what militarism/imperialism has to do with christianity.

Some history for you.

Anonymous:
Thank you for bravely leaving your name.

My thankfulness has little to do with the things you mentioned. It has to do with two things: 1. people who lay down their lives for others and 2. my father.

While I agree with you that Christianity has nothing to do with imperialism or militarism, there are New Testament examples of soldiers being commended and recognized.

The first one I can recall is in Luke 3 when soldiers asked John the Baptist what they should do. He did not tell them to leave the most oppressive and cruel army in the history of the world, he told them to be content with their wages.

In Luke 7, a Roman officer is commended for his faith by Jesus himself. Jesus did not say that the officer would demonstrate even more faith if he resigned his commission.

In Luke 23, Luke again draws the reader's attention to a Roman officer who worships God and declares Jesus' innocence.

In Acts 10, Luke takes pains to tell the story of the first gentile converts to Christianity: a Roman officer named Cornelius along with his household.

Regardless of where you stand on the political motivations of the powers that be, those that serve in the armed forces are biblically demonstrated to be held in high regard by the founder of Christianity, Jesus himself.

I apologize if I've offended you and your politics. But I care about people who serve.

You can agree that christianity does not have anything to do with militarism and imperialism, but the military is the tool of the imperialists. The military has nothing to do with "keeping the population safe". This is the big lie of empires. They create an existential threat that does not exist, brainwash the population that they are in danger, then loot foreign nations for their benefit. The Romans perfected this technique and we are the new Rome. These are not the actions of a true christian nation nor condoned by new testament gospel semantics. It's amazing how the true teachings of Jesus are so easily twisted to conform, after the fact, to the actions of mass murder, theft and political opportinism that self perpetuates the lies of every ruling class since the christian Holy Roman Empire. My favorite question to folks like you who equate god with country is, "what about all the dead people, and why are they mostly brown?"
My name is Guy.

Thanks for your comments. Again, I'm sorry if my post expressing thanks is offensive. I'm not equating God with country. I'm saying thank you to the people who serve, not the government they serve.

I actually agree with some of what you say.

Let me ask you: do you have a historical example of a "true christian nation"?

I was thinking of emailing my dad a link to this post since I said some nice things about him here. I'm glad I didn't, now. You kind of took the subject in a direction I didn't intend.

How long have you been reading my blog, Guy? If you've read for some time, you'd know that I'm not a pro-military right-wing nut. I'm just pausing today to say thanks. I've tried to say thank you to somebody every few days since Thanksgiving is this month.

Don't judge me by this one post, my friend. Get to know me...