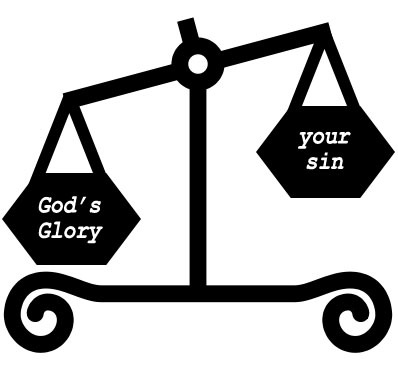 Driscoll puts our love for our sin and the attention we give to it in very simple terms.

The Scriptures continually speak of the One True God as the God of glory. This means that God is to be considered most heavily, or weighty, in the lives of his people, and that the sinful desires in us and cultural norms around us be seen as unnatural, depraved, and light in comparison to him. Simply, until you fear God and weigh him most heavily in your life, you will remain an undisciplined fool. So, I have provided the following verses of Scripture to simply scare you into seeing God in his holiness and power rather than re-envisioning him in your mind as much less holy than he is, and subsequently your sexual sin as much less unholy than it is. (read more here)

My thoughts: If you're an undisciplined fool, raise your hand.

I see that hand.

I love this quote: "John’s warning rings even more true in a culture where, because of technology, it is now easier to see someone naked than to get something out of the fridge—to get to the fridge you at least need to stand up and walk." Driscoll definitely has a way with words. It's much more obvious if I'm are making constant trips to the icebox rather than constantly surfing to the sites that cause decay in my spirit man. But what does start to come out is indifference to the needs of my wife, subtle - if not overt - selfish tendencies, and disdain of the good things God has given me. The more I indulge myself, the less I am able to picture my life as ever being holy and truly used by God. In fact, I picture myself not being used and being "okay" with it. What a horrible place to live.

"Practically, this means that sexual sin should not be managed, but rather put to death because Jesus died for it."-- Managing sin takes more work than its worth. You have to cover your tracks, make up stories, live with or ignore guilt, and constantly think about it so it doesn't accidentally come up in conversation. It's better to put sin to death, bury it, and never visit its grave.

God is sickened by sexual sin and the consequences of it our natural bodies is gross and humiliating. We can't do anything, especially as a member of God's family, without being found out. Let's take initiative and make our sins known to someone who loves us; someone we can trust. This will bring healing. But hiding sin will only force certain, humiliating exposure. Don't think it won't.

"Practically, this means that sexual sin should not be managed, but rather put to death because Jesus died for it. "

How many times have I tried to manage sexual sin, I asked myself.

When have I really tried to put it to death?

"The cold hard truth is that most guys’ struggles are only known by their fellow Christian buddies and unless Christian dudes man up and stop arguing about stupid secondary theological issues and spend their energies holding one another accountable to get dominion over their underwear, then Christian friendship is nothing more than Christian fakery."

Blunt, somewhat harsh, and desperately needed to be heard by guys like us.

Lord, I want Your heart towards this issue.

Bryon, Driscoll has some good stuff here. I wish he had more. This ebook seems too short. I can't agree with the man on everything he says (though I like a lot of what he says), but Driscoll is nailing it with this book.

I agree that it's short. But I think Driscoll did it right putting it on the internet in such a brief format. People don't slow down too much to read while skimming around the web...

Have you heard that sermon of his on Song of Solomon in Scotland, yet? Listening to it now...I bet he is going to hit a lot of the same points he did in the ebook.

That will open up the discussion to the question of whether some of the things he's saying are appropriate. He's getting hammered pretty hard at PP, and I have to agree with part of the criticism. He needs to be sensitive towards victims of abuse, and to remind guys that women are their partners, not their sex slaves. I'm also having problems with some of the stuff he says later on in this book - but I'll talk about that in those chapters.

I meant some of the things he said, not how he speaks (though when he comes off as an arrogant jerk he does himself no favors).