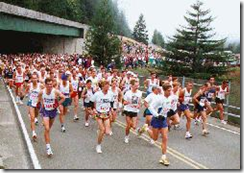 This was my worst time of the four marathons I've run. It took me almost four and half hours: 4:28:and change. The official results have not come out yet.

I was cranking the first part of the race at under nine minutes a mile. The first half of the course was relatively flat, smooth asphalt winding through the Redwoods. My goal for the race was to break the four hour barrier. This has been my white whale for the past three years. I hit the halfway mark at 1 hour, 25 minutes which put me on track to meet my goal. I was surprised to see how many people peeled off at the half-way mark.

The second part of the race was brutal. There were more hills, and I can't even begin to describe the dismal condition of the road. It is obviously very low on the county budget. It was 13 miles of pot holes and patches. It beat the tar out of me. I trained on hills here in town, but I put them at the beginning of my run, not the end. I didn't save enough steam for the last half and my final time reflects it.

It was a lonely run. I'd be surprised if there were a thousand people in the whole race, the half-marathon and 5k included. Only a third was in the full race. I ran for long stretches without seeing a soul.

While the course was beautiful, I miss the energy of the Disney World Marathon in Orlando.