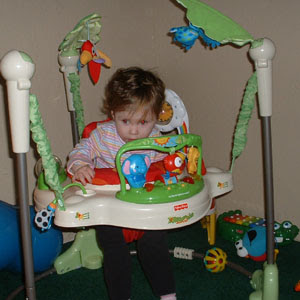 We bought Allie this jump-a-roo. Sometimes she like it and sometimes she's not to into it. She' not quite ready to bounce, but she will hang out in it for a little while. 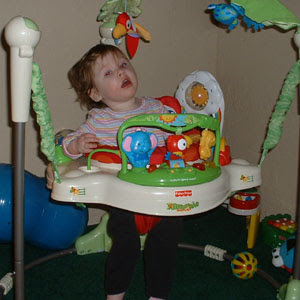 Being up in a vertical position is an entirely new thing for Allie if she's not being held by one of us. She like the perspective. We also do exercises with her where she lays on her belly on her elbows. While she's up on her elbows, she's gained enough head control that she can look around which she loves to do; looking from right to left kicking her feet laughing and smiling and slobbering. I can't help but to drop everything and smother her whole face with kisses. Sometimes I get a mouthful of Allie drool but oh well. 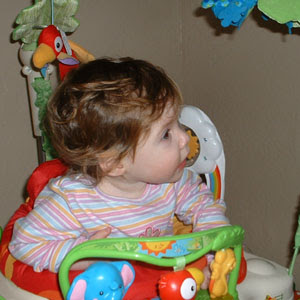 Today we met Michelle Allie's physical therapist along with Melissa, the new girl, Melissa, a transplant from SoCal. Melissa is taking over as Allie's main therapist and she's awesome. Allie really loves Melissa and Melissa has done a great job of establishing instant rapport with Allie.

Melissa had Allie stand in a shoe box full of bean the other day. Allie thought it was so great. Melissa's tough, but thorough. We're expecting big things with Melissa on the case. 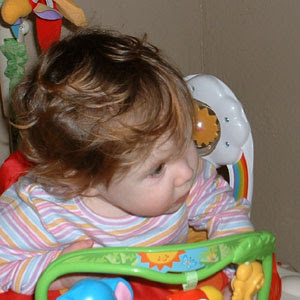 So, as I was saying, we met Michelle and Melissa today down at Hangar Prosthetics. They fit Allie for leg braces today. We were not looking forward to this because Allie is not usually very cooperative when a bunch of people are huddled over her while she lays on a table. But, this morning, Allie was a team player. It was unprecedented behavior for her. She played with toys with Melissa while Michelle and a technician put casts on both legs to make a mold for Allie's braces.

Later in the day, Charity and Allie and I took a ride up to Arcata and hung out on the plaza. Allie did great in both the car and walking around Arcata while we took turns holding her.

Glad for the good report, as always. So neat, that Allie's accepting new things, new positions, a new therapist...goo'ness! That's a lot!

I once heard a young mom, holding her baby up above her, refer to the drool that poured down on her face as "angel kisses." I can buy the concept; I'm not at all sure I would have been able to smile with the joy that was on her face, tho'! I suppose if she'd been my baby....