Just a warning: the following post is not about Allie. If you keep reading, ranting, sarcasm, and a good dose of my personal opinion is what you'll get.

I was in youth ministry for years. When I started in my twenties, most of the kids I worked with thought I was really old and knocking on death's door. So I worked really hard to learn and use their slang properly and become an expert on the latest Christian Rock that mimicked the music thumping on boom boxes, car stereos, and Walkman cassette stereos. That dates me. I'm pretty sure I had hair in those days (a flat top), but my memory is hazy.

My attempts to be down with the teens while sharing the gospel or teaching God's Word made me look like fool. That's distracting.

Cool is a cult. Trying to be relevant is like chasing the pot of gold at the end of the rainbow.

For the past year, I've been really into a TV show called the office. The show is in it's fourth season. The show was on for three seasons before I found out how cool it is. That's how with it I am. 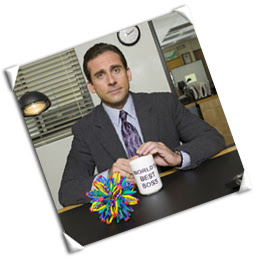 One of the main characters is a middle manager in a paper company named Michael Scott. He runs the office. He thinks he's cool but he's a buffoon and everybody knows it but him. He tries too hard to be relevant. He's hyper-relevant. He just wants everyone to like him. 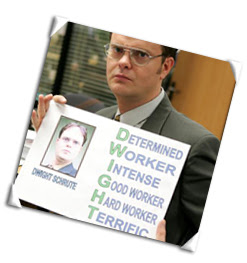 likes him. He's a nut. He cranks heavy metal in his ears and frantically switches between playing air guitar and kick boxing a fake opponent to psyche himself up to go on a sales call or ask for a raise. He likes Star Trek, Battlestar Gallactica, the Lord of the Rings, anime, guns, knives, throwing stars, tear gas, and black jelly beans (I know way too much about Dwight). He's like a wanna be soldier of fortune. I call him anti-relevant.

So there's the opposite extremes of your relevancy slide scale.

I'm just setting things up. I've been reading and commenting these posts: (1) & (2) over on the Simple Minded Preacher Blog, and for some reason, I can't get the topic out of my mind. There's always good information and discussion over there, but this one always rattles me. It shakes me up because it two camps within protestant Christianity that is currently constantly sniping at each other. One side for the sake of "conversation" and cultural relevancy says things that seem, on the surface, liberal at least and heretical at most, just to start a fight. Something like, "the church isn't very nice to homosexuals."

See what I mean? You want to fight now, right?

The other side, watchmen they call themselves, takes the bait and comes off so Pharisaical and stodgy that they are hard to take seriously. If they are in your camp, you are embarrassed by them but have to tolerate them like you tolerate your senile grandpa at family gatherings. He's accomplished too much good in his life to make him sit down and shut up, but you still wish he would.

Both sides say that the other side mis-represents, waters down, dilutes, poisons, compromises, sells out, changes, softens, blunts, splinters, or somehow funkifies the gospel.

But here's the bottom line: the gospel ain't gonna preach itself... it has to be presented.

But because I don't like the way you present the gospel doesn't mean you changed the gospel. I just don't like your style. Maybe I'm a stick in the mud.

The gospel ain't gonna preach itself.
Posted by Bryonm at 8:14 AM

feelin' pretty good about myself after reading your post, Bryon! ;o)

Once caused myself a world of hurt over on Phoenix Preacher. I felt SO at home there that I forgot that a certain topic was a HOT button for many. Bringing up the "H" topic was, for me, not an intention of starting a war. In my mind, I was with brothers and sisters in Christ. I still feel that way, but have learned to leave certain issues out of certain places.
The good part was that I had some big, strong masculine Christian men stick up for me and my welcome there...even given a couple of meltdowns on my part. Gives me warm fuzzies to this day. I miss them. You're one of the good guys, Bryon! Thankyou.

what I meant was, I liked your 'rant' and the other stuff. I liked also where you talked about the fact that the gospel MUST be preached! I'm sorry that I am often lousy at filling in the blanks. I've read some of the posts from those who want to take all you "conservatives" ;o) to task for real or imagined slights.
WHEN folk say they (as homosexuals) are not welcome in church, they might try being a bit more friendly and remove the chip from their shoulder. Some places it won't matter, but I for one have been welcomed at any church I attended. Some folk 'know' my position, but I don't bludgeon them with it and am, in turn, treated kindly. I am there to worship the Lord. All else would be inappropriate.

Right on bro! I do get tired of all the back and forth... Wish we were going to see you on this trip back home. Thanks for keeping up with the blog. Take care, Barrett

Bryon, equating being relevant and cool with chasing a rainbow is a great analogy. I remember seeing Sammy Hagar on the old Bob Costas show "Later" years ago and he said, "I've always just played what I wanted to play and done what I've wanted to do. If it's "in," it'll be "out" so you can never base your life or your art on trends or the passe." That has always stuck with me when I see people overexerting themselves to make what they're doing relevent to the moment.
- Tony

Thanks, Tony. I appreciate the input.