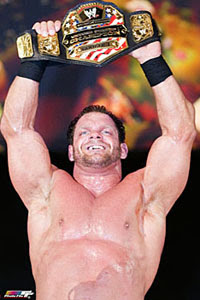 The first time I watched pro wrestling on TV, I was twelve. I knew it was fake. I know, you're probably thinking, "this guy was a genius even as a kid." But, personally, I thought everyone knew it. You can start a fist fight by telling someone that wrestling is fixed. Fans don't believe in Santa, but they do believe in Stone Cold Steve Austin.

I really want to rant but I'm not really launching into this the way I had envisioned.

I've been spending more time than I'm usual watching cable news channels and this is one story that I wish would go away. In fact, with each passing day, Chris Benoit looks more like a hero than a double murderer that took the easy way out. What put me over the edge was watching the Larry King re-run of Monday night's show. A bunch of no-neck WWE celebrities were lined up across the table from Larry King dressed up in open collared shirts and sport coats like wrestlers with pedigrees. These modern day gladiators tried to make Benoit look like my favorite movie hero, the victorious general Maximus Decimus Meridias, keeper of Rome. In the movie Gladiator, Maximus' wife and son were victims, brutally murdered, too. But not at the hands of anyone made out to be a hero. In the movie, it's clear who the good guy is and who the bad guy is. For some reason, if we apply enough spin, blame-shift, and celebrity glam, we can confuse a whole nation and make them think that Benoit was a victim instead of someone that strangles his wife one day, smothers his little boy the next, and then kills himself.

Here's a question: where are the family members who've buried a daughter and a grandson? Why haven't they been paraded in front of TV cameras chained to talking heads? Who's calling the shots? The press or World Wrestling Entertainment?

I love that there's this strategy to blame steroids and doctors. Just think: if the guy didn't commit suicide and then tried to say 'roids turned him from Dr. Jekyll to Mr. Hyde, we'd be laughing at our TV sets from coast to coast instead of feeling sorry for Benoit. If Benoit had survived this, the WWE would throw him under the bus so quickly talking heads would spin.

OJ should have tried the "Steroid" defense.
Posted by Bryonm at 3:03 PM

speaking of wrestling, i saw sgt. slaughter one time on an airplane.
thats all.

thanks for that contribution to the discussion...

I once wrestled my older brother...that's all
:)

Word, I never watch the news. You should read 'The Culture of Fear' it talks about media's portrayal of issues and all kinds of other interesting things. Actually, I should re-read it, it's been a few years...

This only insures another wrestlers wife does not throw out in the middle of an arguement "wrestling is fake." Miss and love you buddy.
Shawn

It's cool to see that you're bloggin'