The Way Up Is Down

Last week (until the iPhone became a front burner topic), Christian blogland was in a tizzy over a new list of heroes.

No doubt, these folks deserve to be on this list. Congratulations are due. And I guess it would be cool for one to see one's own name on a list like that somewhere in the single digits. I guess that's when I sense a slight check in my heart. As much as I'd like to accomplish the great things these folks have, do I want to do it for me, or for the fame of the Lord?

"Everything they do is done for men to see: They make their phylacteries wide and the tassels on their garments long; they love the place of honor at banquets and the most important seats in the synagogues; they love to be greeted in the marketplaces and to have men call them 'Rabbi.'

They dress for pretense. They want to look religious.

Have you ever noticed the kind of odd tendency of people in church to want to be like their pastor? They look and dress and talk and style their hair like the pastor? The more charismatic he is, the bigger his pool of clones is? People follow the leader. They want to do what he does.

We have to think about that in ministry. If I’m doing this to look religious, that’s what my following is going to do. If you want followers that serve, love and disciple, then that’s what leaders need to be doing.

Here’s how to be a leader the Jesus way:
Don’t be called something that elevates you above all others. Many guys are out there and they want everyone to know that you are not equals with them. They assert authority over you. Assert. That’s the operative word. It’s almost as though if they don’t assert that God has given them authority, you’ll never be able to figure it out. So they do things to help you know.

If you want people to show respect to anyone, get out of the way, spiritual leader, and teach people to show God authority. If Jesus has picked you to lead (and that’s a question that still may need to be answered), then lead the way He says to lead.

He who exalts himself publicly will be humbled publicly. Probably not removed, but definitely humbled. This will happen because these are the words of Jesus, and not one of His words will pass away unfulfilled. That’s what makes this so serious. 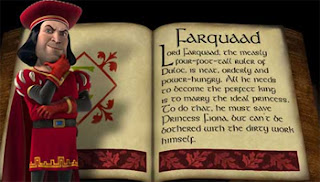 One of my favorite examples of this is Lord Farquaat in the hit movie Shreck. Farquaat thinks he’s so far above everyone else and he goes to great lengths to lavish upon himself the great respect he deserves. He rides on a great white stallion. He erects great monuments and reminders to himself (this kind of reminds me of driving through the Cuban country side a seeing all kinds of billboards of "Papa Castro -- but that's another story). But when he jumps down from his high horse, he’s just this short little guy. He's almost cute. His puny stature solicits from his subjects one of those under-your-breath-chuckles. He takes himself way too seriously. Those in his employ kiss his butt, and all the rest of his subjects, those under his rule, don’t take him seriously, they just tolerate him.

These are things I try to think about the longer I work in full-time ministry. I don't want to promote myself, I want he Lord to promote me.

This document has helped me keep perspective over the years. I try to give it to anybody I talk to that feels called to ministry. It comes from the bookThe Making of a Leader by Frank Damazio.
Posted by Bryonm at 7:25 PM

On a sidenote, I've never understood the need for men in ministry to take up titles like Reverend or Father.

Does anyone know the history on this?

For the record, since I'm following your comment, I have no answer for you. But ever since I first read that passage in Matthew, I've called my pastors by their first names. Obviously, I haven't been going to churches pastored by those who require the titles.