Reminds me of a Seinfeld episode 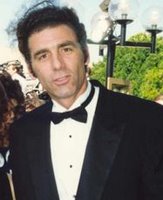 Is it too late to weigh in on the flack over Michael Richard's potty mouth? We all saw the video of Richard's ridiculous rant. We saw his apology (which seemed to me more aimed at Jerry Seinfeld than anyone else).

And then the guys he offended hit the talk-show circuit threatening legal action. It didn't take long for them to find a lawyer.

Or maybe a lawyer found them:

"I'm shocked by the wanton indifference in comedy clubs in this nation!"

Woe to Michael Richards if Jackie Chiles is on the case. Richard's actions that night were "lewd, lascivious, salacious, outrageous!" and he'll get what he has coming if Jackie Chiles gets his victims the justice they deserve.

Jackie could keep this in the media spotlight for so long that "by the time this case gets to court, Richards will be nothing but a shrunken head."

There's not much in this life that hasn't already been done on Seinfeld.
Posted by Bryonm at 5:56 AM