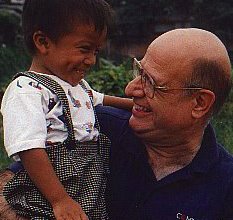 This is the first time I’ve ever heard Campolo speak. I’ll tell you the truth: I’ve stayed away from his him ever since I heard he was invited to the White House as a friend when Clinton was in office.

I feel like an idiot. This man really has something to say and the church needs to listen up.

Campolo recalled his years as a college professor between 1965 thru 1975. He marveled that young people really thought they could change the world. And do it tomorrow. But leaders, political and religious – leaders that embodied the expectation of a better world - were assassinated. I was born in 1965 so it’s difficult for me to process that this happens any where but under third world regimes.

Young people moved from an era of hope to self-centeredness. The so-called “Me Generation”. And then we wonder why we’ve produced such a materialistic generation.

Campolo did sort of a fill in the blank thing with the conference crowd:

“The purpose of an education is to serve people in the name of Jesus Christ.”

Campolo says that present day politicians play on our fears. And preachers get their sermons from politicians instead of the Bible. Ouch.

“But those who wait upon the Lord shall renew their strength; they shall mount up with wings of eagles, they shall run and not be weary, they shall walk and not faint.” Isaiah 40:31

Compassion is an emotion. Allow the Holy Spirit and the Bible stir up compassion in our lives.
Posted by Bryonm at 8:58 AM

why does that sound so insanely profound?

as to "crushes"? Funny comment! But seriously, If you've never given the wife a reason to doubt, you are a good man meeting her security needs. Bravo!