There is great shock value in telling people you’re heading over to the Middle East. My parents mostly say, “That’s nice, Bryon. How do you think the Dolphins are going to do this year?” And then they talk about me to my brother and sister thinking I have a screw loose or a death wish. My father, a big Tom Clancy fan, pretends I’m in the CIA to comfort himself.

I took my first trip to a Muslim ruled country a few years ago. I mentioned it to a pastor I really look up to and he said, “What do you want me to tell your wife at your funeral?”

To his credit, the Muslim country was Sudan and they were embroiled in civil war at the time.

“You can’t believe everything you see on T.V.”

Those words of wisdom came from my mom when I was growing up. Of course, I would just look at her with sort of a blank stare and think to myself: you can’t be serious, Mom… it’s on television… it has to be true…it’s a law of the universe…

I now believe that about everything I read on the internet.

I’ve never seen hospitality practiced the way it’s practiced in the Middle East. Courtesy is a way of life. Rude behavior toward guests is not tolerated.

We had the unfortunate experience in the course of two days of getting three flat tires. Two one day while on some remote, desert back roads, and one on our final day of travel to the airport. While out in the desolate back roads, people seemed to magically appear to help us change our tires. Thankfully, we had two vehicles of the same make so we had two spare tires available to fix our two flats. The occupants of the vehicles were not even allowed to lift a finger. We broke down in their territory so we were guests. The locals changed our tires. Muslims helping westerners – Christians. 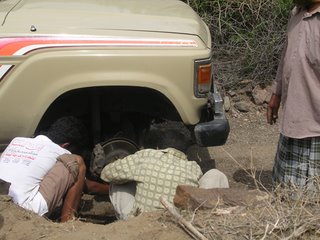 One of our new tires was punctured by a nail the next day on a busy highway. The tire iron we had in the car didn’t fit the nuts on the rim correctly. There is my skin and blood from a damaged knuckle at the scene to prove it. The first car we flagged down stopped, but they didn’t have the tool we needed. The second car we flagged stopped. Same thing – wrong tool. The third car we flagged stopped and had what we needed. The fur guys in the car got out and changed the tire in record time. I was amazed.

I knew I was home when I visited the drug store the other day to buy some orange juice. I was paying the cashier when a woman in an obvious hurry came in looking for batteries. She left her car running with her daughter decked out for her first communion sitting in the passenger seat. The lady asked the cashier who was helping me where she could find double A’s so she could be on her way.

The lady asked the guy behind me with a basket load of items if she could go first.

I couldn’t believe it. I was embarrassed for everybody. Especially for the poor little girl who walked in to witness her mom’s humiliation on her special day.
Posted by Bryonm at 6:34 AM

From your sister,
I've always known you have a screw loose. Who wouldn't in this wonderful family of ours. We still love you and I think you are doing something amazing and I'm very proud to have you as my brother.