Gayle delivered his message in classic Gayle style. Calvary Chapel Ft. Lauderdale is a venue that

seats 3500 or so people. But when I closed my eyes and listened to Gayle, I thought I was sitting in my living room listening to the encouragement from a father. Gayle’s style of delivering a Bible study is simple and unassuming. He’s not trying to impress. He just wants you to know that he’s just a guy like you or me. And God has something He wants you to know because He loves you.

Gayle taught that God forgives. Forgiveness is an Old Testament concept. Ancient Jewish tradition teaches that God forgives no matter what. And God proved this by wrapping Himself in skin and walking among men. Enter: Jesus.

Jesus chose the disciples He chose – not men of great stature or talent – because He wanted to prove that He could work with and teach anybody. That’s why God chose you and me. God will work with anybody.

In Matthew 6:7-14, Jesus teaches His disciples to pray.

Luke 5:17-26, is the story of the paralytic brought to Jesus by faithful friends. The Pharisees said this man was paralyzed because of sin. Jesus gives the man the remedy for suffering from sin: forgiveness. Of course, the Pharisees huff and harangue, “Who does this guy think He is, forgiving sin?”

Jesus answers the question by commanding the man to get up and walk. Make no mistake; Jesus has the power to forgive sins.

If we don’t forgive those who wrong us, our lives are ruled by those people. We need to forgive. If we confess our sins, God forgives us (1 John 1:9). We need to be ready and willing to forgive those who’ve wronged us. Our sin against God is out of proportion to the sins committed against us by anyone. If God forgives us, we need to forgive others (Col 3:12-13). Not fun, not easy, but necessary if we expect God to work in our lives.

Gayle shared a couple of funny lines about our attitude in prayer toward those that have wronged us. Our prayers go something like this: “Dear Lord, give him lockjaw and nausea at the same time.” Or, “Strike him with palsy and arthritis all at once.”

So how do we really and truly forgive? We pray for our adversaries like we would want someone to pray for us: “Lord, work in his life. Forgive him. Use him to reach others for your glory.”

That reminds me of something my pastor taught this past Sunday: “Obey God and the emotions will follow motion.” 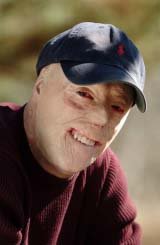 Pastor Bob introduced Joel Sonnenberg after sharing some thoughts from 1 Corinthians 1:26-27. I’ve never heard of Joel. I like these kinds of surprises.

Joel came out from backstage wearing a baseball cap; I noticed that he was different from the way he walked. An image was projected onto the high definition screens of Joel that was, well, a picture of a horribly disfigured man. One hand was a little more than an appendage that was like a claw and his other arm ended at his wrist. His face was totally scarred.

Joel was in a car accident as a baby. On the way to a family camping trip, Joel’s car was in lined up at a toll booth. Joel’s normal life was instantly and horribly altered when a tractor trailer slammed the line of cars at full speed. Joel’s car burst into flames as he sat in his car seat until someone, risking his own life, pulled Joel in his burning car seat from the car.

Joel should have died. He was given a 10% chance to live. He was four and a half months in the hospital and then, says Joel, “the hospital followed me home.”

Joel never wanted to be labeled as a “Special Needs” person. He didn’t want to draw undue attention to himself.

Joel went to seminary, and at an early age, began to speak in churches and to groups around the world. Joel is now 28 years old and is grateful for the influence God has given him due to his disabilities.

About 19% of the population is stricken with some kind of disability. No one is immune. Disabilities do not distinguish between race, tax bracket, or social status. Michael J. Fox, Muhammad Ali, and Christopher Reeves are all examples of people stricken without regard or respect for who they were.

Ministry to these people – the blind, the lame, the deaf, and the leper – was a high priority to Jesus. Joel challenged listeners stating that we all live by faith, not by mobility, sight or hearing (2 Corinthians 5:7).

Jesus can use anybody to minister to the masses no matter what he has to offer. Jesus used a small boy’s lunch to feed a multitude (John 6:9).

Pastor Mark Davis is Calvary Chapel Ft. Lauderdale’s Executive Pastor. If I learned just the things that Mark has forgotten about ministry, I’d be a wiser man than I am now.

Mark gave a practical talk about church finances. This is one of those areas that churches just kind of learn as they go through trial and error. I like the idea of learning from Calvary Chapel Ft. Lauderdale’s mistakes and possibly preventing blunders of my own.

Mark put together an informative handout packed with more information than could be covered. He’d probably email the packet to you if you asked for it. Contact his office at mark@calvaryftl.org.

The verses Mark bases his ministry on are 1 Corinthians 4:1 & 6-7. Mark discussed stewardship (the church needs to model it; teach it; live it).

On the topic of Expense Guidelines for staff, facilities, ministry and missions/outreach, Mark emphasized the need to stay dependent on the Holy Spirit for guidance. There needs to be planning, but flexibility is key. It’s a walk of faith. Mark says that at Calvary Chapel Ft. Lauderdale, they don’t have a long term “business plan”; they have long range dreams, hopes, and prayers. He challenged us with this question: “Can you be obedient to the command to ‘live by faith’ if you’re executing a business plan?” Good question.

The cost of doing ministry as it relates to purchasing property can involve borrowing money from lenders. The approach to borrowing needs to be cautious and conservative; not presumptuous.

There needs to be good reporting systems in place. Budgets need to be tailored to serve ministers, not accountants. Budgets are tools for both those who spend the money and those keeping track of the money. When making reports, give explanations with the information listed. Otherwise confusion followed by difficult questions to answer will result.

Mark talked about professionalism. When making proposals to businessmen in our community, we need to be prepared and professional. There needs to be a strong leadership team from the church lending credibility to proposals. The church needs to model integrity and good stewardship in the business community where God has placed it.

The evening session began with an amazing time of worship and praise lead by Clay Hecocks. The music had a very gospel and blues feel. The singers and band were engaging. The crowd was not an audience or spectators. They were actively praising and worshiping with as much energy as those leading from the platform.

Bob Coy began the evening by recognizing his brother Jim and sister-in-law, Theresa. These were the ones who introduced Bob to Jesus Christ and the relationship with a Savior that transforms lives. The fruit of Jim and Theresa’s example to Bob is a multitude of lives touched through the ministry of Calvary Chapel Ft. Lauderdale.

Bob continued by explaining that Jim introduced Bob to a man whose ministry has spread from just a handful of people meeting in a church in Southern California to more than a thousand churches around the world during the past few decades. Chuck Smith came out with the huge smile of a proud father and gave Bob a hug. Chuck read the account of the Queen of Sheba’s visit to Solomon (1 Kings 10:1-9). Chuck recounted his visit to the campus Calvary Chapel Ft. Lauderdale now occupies. It used to be an industrial complex but has been transformed into an amazing ministry center that 18,000 people call their church home.

The evening was then turned over to Chuck and he opened up his Bible and began to teach. “Ever feel like running away?” asked Pastor Chuck. This was Zerubbabel’s (Zechariah 4) feeling when he came to rebuild the temple in Jerusalem that was leveled several decades earlier by a conquering army. He and his team set out with high hopes and expectations. They knew all the old stories about the former glory of Jerusalem and knew that the city’s restoration was their God given task.

There are times when we work all day and it seems like we are in a deeper hole at the end of the day than when we started. We’ve all had times like that.

This is often what God brings our lives to in order for us to understand that it is “’Not by might nor power, but by My Spirit,’ says the Lord of hosts (Zechariah 4:6). God is not going to accomplish His work through physical strength or abilities and He doesn’t depend on human effort whether physical or mental.

Chuck explained that when he first began his ministry, he tried every known church program available.

It’s time to let the Lord do the work. That way, the work will actually get done. The tasks that wear us out, God can do without effort.

Here’s what Chuck challenged pastors to do: Simply teach the word of God simply.

Bob Coy wrapped up the evening by quoting two words from Zechariah 4:7: “Grace, grace.” Not “work, work,” or “push, push,” or “manipulate, manipulate.”

Great information! Thanks for sharing this.

It was a pleasure to meet you. Hopefully you made it safely back to the land of free-WiFi Starbucks.

my first cc pastors conference. i loved it!