I was curious about the origin of this test so I did a little research on the guy who developed it.

The test puts persons into one of four of the boxes with the above labels. The idea is that people required to communicate with each other would learn the best way to approach and converse with co-workers, spouses, or family members with different communication styles and tendencies. 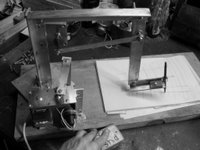 The DISC Personality Profile Test is the brain child of William Moulton Marston
(1893-1947) Marston was a prolific inventor, author, and scholar. Have you ever heard of a "lie detector"? He invented it. Coupled with the DISC Personality Profile Test, the lie detector is the perfect partner for pre-employment screening and interviewing for promotions. I once had a boss who used the results of these tests to pick his beer drinking buddies. Hook me up to the machine if you think I'm lying.

Marston is the author and creator of wide variety of publications. Emotions of Normal People is one that may or may not be familiar to you. Or perchance you've purused the pages of Integrative Psychology. Probably not; this is a rare and expensive book.

One publication that Marston has to his credit that you have no doubt heard of is Wonder Woman Comics. That's right. Lynda Carter would never have graced my pre-teen television tuning had it not been for the monumental work of William Marston, Ph.D.

Nick Gillespie had this interesting article about Marston on Reason Online's website. Below is an interesting tidbit cut and pasted:

As Les Daniels recounts in the fully enjoyable and always fascinating new book, Wonder Woman: The Complete History (Chronicle Books): "Marston believed women were less susceptible than men to the negative traits of aggression and acquisitiveness, and could come to control the comparatively unruly male sex by alluring them....He was convinced that as political and economic equality became a reality women could and would use sexual enslavement to achieve domination over men, who would happily submit to their loving authority."

Such notions, suggests Daniels, help explain some of Wonder Woman’s crime-fighting accoutrements, especially her "magic lasso" that -- shades of a lie detector! -- forces men to tell the truth, the whole truth, and nothing but the truth.

Marston’s personal life was every bit as unconventional as his ideas about matriarchy; if nothing else, the details make one wonder about his fixation on liberated women. In 1915, the same year he graduated from Harvard, Marston married a Mt. Holyoke grad named Elizabeth Holloway, who went on to earn an M.A. and law degree, and to assist him in his psychological research. In the late ’20s, when teaching at Tufts University, Marston met a student named Olive Richard, who moved in with him and his wife.

Marston had two children by each woman and he and his wife formally adopted his children by Richard. "It was an arrangement where they [all] lived together fairly harmoniously," one of Marston’s sons told Daniels. A business associate vouched for Marston’s offbeat arrangement, remembering him as "the most remarkable host, with a lovely bunch of kids from different wives...all living together like one big family -- everybody very happy and all good, decent people."

Well, in a couple of weeks, we'll have the results back from our DISC test. I wonder what box I'll land in, Dominance, Influence, Submission, or Compliance.
Posted by Bryonm at 8:46 PM

Yeah, so what's wrong with the picture on my blog, if you can do all this research?