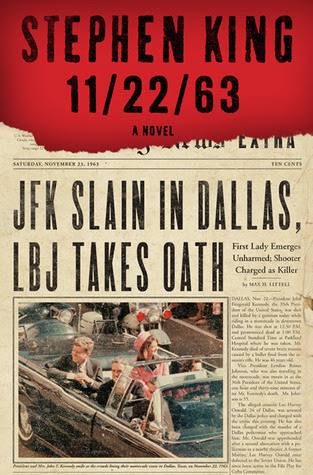 Stephen King is the master of “Show, don’t tell.” Ten years have past since the last time I read Stephen King. The last book I read from King was his book On Writing, which, if you are a writer, this is a must read.

It’s been at least twenty years since I’ve read any fiction from King. That’s not an exaggeration. I tried to read the sequel to The Talisman called Black House, a collaboration between him and Peter Straub, but it was just too weird.

I don’t read fiction, usually, but I’ve been in the mood lately and 11/22/63 did not disappoint. Take the plotlines from to Back to the Future, JFK, and Mad Men, smoosh them all together, and then kneed in King’s off-centered brilliance, and you have a great story that keeps you sneaking peeks at your desk and stop lights and other authorized and unauthorized reading nooks for about 800 pages or so.

Here’s the gist: the main character, Jake, a school teacher with an estranged wife and, basically, no life, is challenged by an old guy that was in decent health 24 hours earlier, but has suddenly aged about thirty years and is at death’s door dying of cancer (there’s a clue, Jake), to go into the past and save JFK from a head on collision with a piece of lead courtesy of Lee Harvey Oswald.

Jake goes into the past and learns that the past does not want to be changed. That’s where most of Jake’s many problems come from – the past is obdurate. Here’s the thing, if you go into the past and change something, it affects the present/future. But if you come back and the go back into the past, the past resets itself. So now you gotta make the changes all over again. Does that hurt your head to think about? Read the book. King’s freaky story telling is strangely soothing.