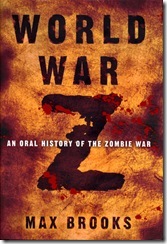 Listen. I don’t believe in Zombies. I don’t like the whole Zombie craze. Vampire stories don’t do it for me. I’m just not into the living dead genre.

This book is awesome. Max Brooks approach to writing this book was creative, simple, and believable. Rather than a narration by a narrator, it is written as a series of interviews by someone writing a report of an apocalyptic, world wide war against Zombies. Zombies crazily craving human flesh. They are unstoppable short of destroying their brain. They freeze in winter climes, but thaw out when the snow melts. They walk along the ocean floor. They attack relentlessly even when limbless and unable to ambulate.

When it comes to fighting them, technology doesn’t work. Conventional wartime propaganda and psychological warfare are ineffective. The threat of death doesn’t work because they are already dead. It seems that mankind is going the way of the dinosaur and we might as well get used to the idea.

This book is in the process of being adapted as a major motion picture starring Brad Pitt. Here’s a trailer.

Get the book before you see the movie. That way you can be truly smug like me, look down your nose at your friends and declare, “The book was way better. Oh, you didn’t read it?”