Maybe you could pray with us 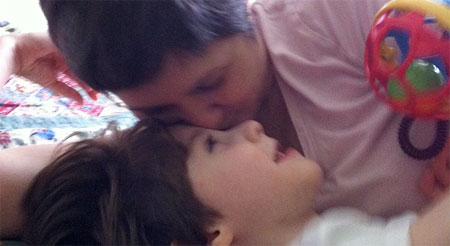 "How's wee Allie?" This is how my prayer/warrior friend Dot greets me every time she sees me.  She's Scottish so when she says "wee" she means little and she says it with so much affection it makes me melt. Love my kid and I'll love you.

I have another friend, Joyce, that informed me today that she prays for Allie daily right along with her children and grandchildren. This touches me. This lady is way nicer to me than I am to her. This is why I have guilt.

This summer has been a long one. Allie has had a difficult time. Early last spring, Allie's seizure activity spiked. We were baffled. Her seizures started every morning with a painful, panic-filled shriek and often ended with an epileptic episode that lasted as long as a minute. She can't breathe and her lips turn blue from lack of oxygen. It's the longest minute of your life and it happens pretty much every morning like clock-work.

For the past year, we've tried several medicines to manage the seizures with mixed results. Some medicines left her dopey. One left her lethargic for about three days with one dose. The up-side was there were no seizures. The downside was that she was in daze that was just unacceptable.

Her neurologist scheduled her for a 24 hour video EEG in July. She had several painful startle events, but none that resulted in an epileptic seizure. It's like when you take your car into the shop because it's making a weird noise but then won't do it for the mechanic. But your mechanic only charges 75 bucks an hour.

Her doc decided that these events are not neurological. They are related to gastrointestinal (GI) activity. After looking at the results with the doctor and talking at length with him, this really makes sense and it is very common with kids that have cerebral palsy and brain damage like our little Allie. So now GI doctors are in the mix. Her general pediatrician is a genius and a wizard and a gentle saint. He's been walking through this with us.

Quick story: He's been practicing in South Florida forever. When he first met Allie and we told him her story, he informed us that he already heard about Allie because his daughter was a nurse for Allie in the intensive care unit in San Francisco where Allie was when everything first went down. Crazy, right?

On one hand, it's a relief that Allie isn't experiencing seizures triggered in the brain. But it's torture to watch her and to have to comfort her through several painful daily events that come from simply digesting food. Her pediatrician has prescribed another med that seems to be working to relax her intestines and provide some relief, but there's still a lot of healing that needs to take place. Do you think you could pray with us as we meet with a new doctor on Tuesday to troubleshoot Allie's digestive pain? The persistent and faith-filled prayers of our friends has been the one thing that has helped us and served us most.
Posted by Bryonm at 10:15 PM

As always....praying! Allie Rae is always on my heart and in my prayers! Asking for miracles for Allie and our sweet Caleb. Love u guys!! Nancy

Bry, Scott, Sammy and I will keep Allie in our prayers.

@Nancy: it makes me sad that we don't get to interact with your family more regularly. I know God is still unfolding His plan for your family.

@Lisa: thanks for your prayers. Give Sammy a huge hug from Allie and the Mondoks. His prayers (and yours) are so special and faith-filled.

I'm so sorry to hear sweet Allie having to go through this every morning. I'll be praying for her and her doctors. You guys are such amazing care takers. May God bless you more than you could ever imagine.

Will be praying. I'm so grateful that we can bring our request to the maker of the universe and that he knows our heart and our pain.

Praying for you all. I'm visiting family in Michigan this week so just got a chance to read the new blog. Darlene