Fanboy: a person willing to defend and promote the object of his affection regardless of fact and objectivity. UrbanDictionary.com 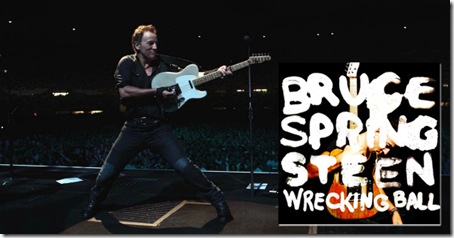 I laugh at those guys that pitch a tent and wait in line for the newest iGadget. But if I’m honest with you, when I look in the mirror, I see a pathetic goof that is just as silly about the Boss’s music as those waiting for the next Vampire Dairies thing to hit the streets.

But you have to take Springsteen seriously, right? Who else has a finger on the pulse of the American working man like Bruce? “I always try to gauge the difference between American Reality and the American Dream,” Springsteen said in an interview with Jon Stewart in the March 29, 2012, issue of the Rolling Stone.

It’s going to be tough, but I’ll try to be as objective as possible. Wrecking Ball is the best album the Boss has put out since The Rising, that piece of work haunted by ghosts from 9-11. In Wrecking Ball, Springsteen animates the statistical victims of the American Economic Crisis with flesh and blood.

The music in this album will bring to mind Springsteen mega album, Born In the USA. You’ll hear gospel, rap (Yes! Rap!), and New Orleans style slow marches in the mix. Poetic and passionate and as familiar as someone in your neighborhood.

The Big Man, the late Clarence Clemmons, laid down tracks you’ll hear on this album.

I doubt it’ll happen, but the Boss can stop now. Greetings from Asbury Park and Wrecking Ball make a nice book ends for Springsteen complete collection.

Famous line from Vampire Dairies: "I vant to suck your milk carton."

I love your blog! Keep it up