Book Review: After You Believe 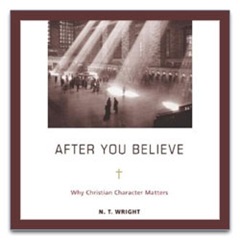 Landing an airplane on the Hudson River in the middle of winter and everyone walking away with nothing more than cold wet feet is a miracle. That's what the media called it when Captain Chesley "Sully" Sullenberger set US Airways flight 1549 down on the river across from New York City.

For you or me, this was a miracle. For Sulley, this was a natural course of events in response to an emergency. Skillful, yes. Amazing, no doubt. Bit probably not a miracle.

Tom Wright opens his book After You Believe with this story. Wright isn't debunking miracles; far from it. He's illustrating, rather, the stupendous results of skillfully applying oneself to a task and a craft. "Yes, maybe airline pilots and other people need to practice their skills and learn to keep a cool head, but does this have any significance beyond a purely pragmatic one, that certain tasks demand that some people develop certain abilities?" says Wright as he makes a case for Christian virtue.

Virtue what you work on after you experience the grace of God. "Worship and stewardship, generating justice and beauty: these are the primary vocations of God’s redeemed people," he writes.

Is the Christian life just about getting saved? What happens next? Are we trying to earn God's favor by doing good work? Is it grace? What's the point if no matter what we get heaven? Many Christians get caught up in rule-keeping, keeping just enough rules to get by or hang on until the end. Wright says that there's a bigger purpose to living well: virtue. "Most art requires massively hard work; so does most moral living," Wright says.

Theologians through the centuries have grappled over the idea of virtue. Some say it's a pagan concept originating with Aristotle and Seneca. These men promoted the concept of a "self-made man," yet they in their own lives were hardly successful Martin Luther was even known to thumb his nose at the idea of human virtue.

Yet Paul, Wright points out, says “Yet it was not I, but the grace of God that was with me” (1 Corinthians 15.10). "Daytime people, in Paul’s perspective, are people who are making the choices in the present, developing the character in the present...," Wright reminds his readers.

In Wright's book, Christian living supported with a theological backbone. This book is for any Christian or any God-seeker. A life lived well for God not only makes sense in this life, but it prepares you for the world to come. It's the next logical step in becoming a better person, God's image bearer.