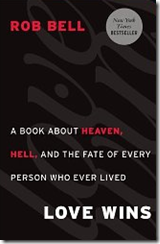 Rob Bell's writing style is not readable to me. I bought Love Wins the week it was released and tried to read it, but couldn't. It opens with rapid fire questions and extra-biblical concepts I already wrestle with and don't have the answers to and Bell never stops to let me catch my breath and he doesn't explore any of the controversial concepts enough for me to stop and think about what I actually think about what he's writing. His writing annoyed me the way the previous sentence probably annoyed you.

He writes like he speaks and that rarely works for most orators, speakers and preachers. So when I found that Bell reads the audio version of this book, I downloaded it and that worked better for me because, like him or not, Bell is a very engaging speaker.

If your theology is based on Covenant Theology, Reformed Theology, or the extra-biblical but logical conclusions of TULIP, you won't be a fan.

If you've given yourself permission to name by name those who inhabits hell even though the Bible never reveals these things, then you won't be a fan either because Bell takes you on and he's not very nice about it.

Here are this blogger's conclusions about Love Wins:

If you've read the book, I'd love to hear your comments.

A friend lent me this book to read and I did try to read it; but, every fiber of my being screamed "heresy" and I was unable to force myself to read the book in it's entirety. I did thumb through it, read reviews and sought out the advice of other Christians; but, I eventually came to the conclusion that this book is a lot like my birth father. It tries to twist the Word of God into something it is not. Just my humble opinion....