I found this article I wrote a couple of years ago. I'm working through my blog looking for content to organize into a book about Allie. I originally wrote for Domestic Violence Awareness Day 2009.

I agreed to post about Domestic Violence today. My family and extended family have been severely impacted by domestic violence. Below is a letter the judge residing over the case involving my granddaughter asked me to submit to the court in the city of San Francisco.
My purpose for posting this is not to draw attention to the young man paying for this trespass. It is to draw attention to the far reaching, multi-generational impact and consequences of the violence that sometimes takes place in the safest place in the world: home.
It is imperative that I mention that the immediate family of the offender in our situation have been our most significant supporters day in and day out and our gratitude to them will never be adequately expressed. Our affection for them grows daily.

It’s difficult to imagine what the future holds. We all imagine a future better and brighter than the difficulties we’ve weathered in the past. My wife and I have been married for twenty-three years this August. We married very young (She just turned twenty and I was a couple of months away from my twenty-first birthday). Our first child, Charity, came along when we were married ten months. Aaron followed about twenty months later.
We tried to do everything right raising these kids. I worked as hard as I could so Susan could stay home with the kids. I have very little formal education so that means I worked a series of blue collar jobs to keep a roof over our heads and food on the table. I managed to go to Bible College part time at night and on weekends. In 2000, I started to work in full time church ministry.
I worked for our church both locally and on the foreign mission field. As my two kids grew up, my wife began to talk about what we would do with ourselves when they were out on our own. We’d be in our early forties and knew that we had a lifetime in front of us. We had conversations with relief organizations about working in Africa. 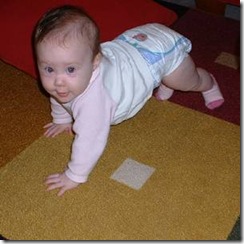 We knew that our plans were on hold when my then eighteen year old daughter got pregnant. Charity had Allie just after her nineteenth birthday. We were in love.
Charity lived with us and Allie’s father moved to San Francisco. They never seemed to be in love anyway, so it really wasn’t an issue. We decided we’d help our daughter any way we could. While Charity finished up vocational school and worked part time, Susan cared for Allie. She was the light of our lives.
In December of 2006, Charity’s schooling came to an end. She began to think about what was next for her. She’d been talking to Allie’s father, Timmy, from time to time and between the two of them, they came to a decision: Allie and Charity would move to San Francisco. Susan and I were devastated, but knew that this was Charity’s decision.
The day Charity left was the most depressing day I can remember in my adult life. But I had no idea how difficult the days ahead would get.

On the evening I returned from an out-of-town assignment, I got a phone call in the middle of the night from my daughter. She was terrified.
“Oh my God, Dad! You have to pray. Allie stopped breathing. She’s on her way to the hospital in an ambulance.”
In an hour or so, we received another call.
“He shook her and squeezed her. They have her breathing on a machine.”
That was pre-dawn Sunday morning; I was on a plane before sunrise on Monday. 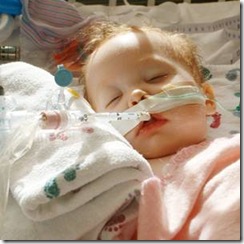 Charity did not relate information very well. I was astounded to find Allie in a coma. The day I arrived, she was not able to maintain her body temperature, she had tubes taped into her mouth and nose, and her head was wrapped with bandages. It was a difficult sight to take in. It was terribly disorienting for me, like a train coming off its rails.
I got a number of reports from the doctors. Here’s how I remember it: Allie had a broken collar bone, a broken leg, and a broken rib. Each injury was in a different stage of healing indicating that the abuse was not a one time event. At the time, the doctors in the intensive care unit where Allie was being cared for did not know if Allie would be able to breathe without the machine. We had a conversation about a future discussion that may need to take place if Allie couldn’t breathe on her own; options I didn’t want to think about then and don’t want to think about now.
My daughter Charity was in a daze. I had to talk to social workers, some helpful and some hostile. I had to be told that Allie had moderate to severe brain damage and that she’d be handicapped the rest of her life whether she came off the breathing machine or not. I was told that if and when Allie came out of the hospital, she would probably not be released to us, but into a medical foster care program that was better equipped to care for her.
The good news is that Allie’s little body began to maintain temperature. She was successfully taken off the breathing machine a few days later. But she was still in a coma.
Allie was only ten months old at the time. 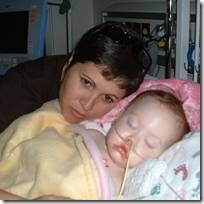 Allie came out of her coma on the tenth day after my arrival in San Francisco. That was the day my wife made the trip from Florida. As Susan was talking to her, one of her little eyes began to flutter open.
A week later, a G-tube (a feeding tube giving access straight into her stomach) was installed. Susan lived with Allie in the hospital and was fully trained to care for her. Allie needed round the clock care both in and out of the hospital and Susan was on top of it.
We were live-scanned and approved for foster care. After six weeks, Allie was discharged into our custody.
We left everything we had in Florida and moved immediately to Northern California where I was raised and still had family.
I couldn’t afford to maintain a house in California and in Florida and we couldn’t sell or rent our home in Florida’s dismal real estate market, so we lost our house. I was able to continue working in my field from my new home, but I had to take a pay-cut since I wasn’t able to continue in all of my regular duties. But given the choice to keep Allie in California or keep our lives in South Florida, we picked Allie. We’d make the same choice again in a heartbeat.


A day with Allie

We had no idea what we were getting into. Having the support of hospital staff was easy. The drive from the hospital in San Francisco to our new home in Eureka is a six hour drive. Allie screamed the whole way. It was harrowing.
Her condition upon discharge was cerebral palsy, quadriplegia, and cortical visual impairment. She couldn’t take food or liquids orally; we had to use the G-tube. She had no head or upper body control. The only protective reflex she had was to tense up her entire body which makes her straight as a board. After a few hours with this “tone,” she begins to cramp. She takes a muscle relaxant twice a day to minimize this condition. 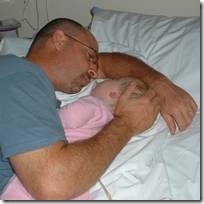 For the first several weeks, Allie cried for sixteen hours a day. We had to keep the house as quiet as a morgue. Any stimuli would set her off. We had to (and continue to have to) bounce or rock her to sleep every night. This took a minimum or forty-five minutes to as long as, on occasion, three hours.
We had to hook her to a feeding machine every three hours around the clock for nourishment. Thankfully, with the help of an amazing speech therapist, Allie is able to take food orally now. The change has helped Allie tremendously. Eating and drinking are incredibly soothing activities, it seems.
Allie had spasms at odd times during sleep or waking up that caused her head to turn abruptly toward one shoulder. At other times, the spasms caused her arm and shoulder to jerk. These episodes lasted for about a minute. Our neurologist did not seem surprised by this, however. He doesn’t believe that the spasms are seizure activity; they just come with the territory.
Now, instead of isolated spasms, her whole body folds into the fetal position. She stops breathing for the minute the episode lasts. The shortness of the occurrence keeps doctors from worrying that it’s some kind of seizure. Their opinion is that it is linked to an over-active startle reflex. They don’t happen daily. They seem occur in cycles of a few days every month.
Immediately upon our arrival in Eureka, we enrolled Allie in physical therapy, occupational therapy, and speech therapy. And now that we’re back in Florida, she continues to attend therapies on a regular schedule. We’ve been blessed to have incredibly talented people involved in Allie rehabilitation both in California and Florida. They’ve helped Allie improve and have trained Susan and me to work with Allie at home.


What’s Next for Allie?

Next week (March 24, 2009) Allie will have hip surgery. Due to the damage to her brain, her body is not growing in proper proportion. Her bones are growing faster than her muscles. The strain of her muscles against her bones has caused her hips to migrate out of joint. Her right hip is 50% out of joint and the left is 35% displaced. Her legs “scissor” as a result. This is one of the factors that keep her crippled.
While the surgeon is working on Allie’s hips, he’ll lengthen her Achilles tendon and hamstring muscles. This will not guarantee that Allie will walk one day, but if she doesn’t have the operation, she won’t and, eventually, her hips will pop out of joint. There is also no guaranty that she won’t have to have this operation again. It’s highly likely that as Allie hits her normal growth spurt in puberty, she may need the procedure repeated.
Allie is a full time job for both Susan and me. I’m able to continue working at home so that gives me the flexibility needed to do what it takes. Our whole lives are structured around Allie’s unique needs. Allie is the center of our universe, and caring for her consumes all of our waking ours. A couple of times a month, we get some respite when Allie’s paternal grandmother visits with her for a few hours on Sunday afternoons.
Posted by Bryonm at 9:58 PM