Book Review: Ahead of the Curve

Ahead of the Curve
By Daniel Fusco
Mustang, Tate, 2010
Number of pages: 99 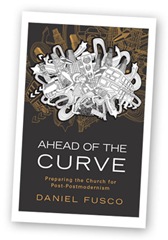 Postmodern this. Postmodern that. As the church tries to engage culture, it always seems to be a little behind the times. Current culture is postmodern say key note speakers at church conference venues, big and small, from coast to coast across America. But the church is about forty years late to the party if it's just now talking about this. "Welcome to the twentieth century, Twenty-First Century Church," author and pastor Daniel Fusco seems to be saying in his book, Ahead of the Curve.

Post modernity has taken root in Middle America and even the Bible Belt. "The northeast and the west coasts are already post-postmodern, and that is the subject of this book," writes Fusco.

Fusco traces his tracks from his conversion to Christ to becoming a church planter in two blatantly liberal demographics: New Brunswick, New Jersey, and Marin County, California. In the first half of this short book (I read the entire thing on a flight between Houston and Albuquerque, NM), Fusco lays out the definition of modernity, post-modernity, and post post-modernity and how world view and culture at large has been shaped by them. The second half of the book lays out how the church of Jesus Christ should respond and get out in front of shaping culture.

I'll have to admit that I was a skeptic as I worked through the first half of the book Two things were going through my mind: 1) this is too big of a subject to handle in such a small volume, and, 2) I braced myself for some kind of shrink-wrapped, seeker-sensitive marketing solution. Fusco kind of set me up for this, though, in the book's first half, using language like ex nihilo, ontology, etiology, and aporia. I appreciated his explanation of these words because, like I said, I was on a plane and didn't have access to my unabridged dictionary of rarely used theological and sociological words.

I was pleasantly surprised by Fusco's conclusions of how the church should engage and even stay out in front of culture. Fusco kept it simple. He kept the main thing the main thing. I don't want to give away what he wrote because there's only 40 more pages out of the 99 left to read. So, church-planter, pastor, future church planter, future pastor, you should get the book and find out for yourself. The book takes about two hours to read. It will be time well spent.