I've been hearing from friends in the Middle East in the middle of all of this turmoil. Some friends in Cairo have been evacuated and some have stayed. Friends in other Middle East countries have witnessed protests but most have been peaceful.

While our government has been cozy with corrupt dictators - even allies with them - in these countries for the past several decades, it seems the people living there have grown weary of their leaders. Yet, there is some hope. Look at the picture emailed to me from a friend of a friend. 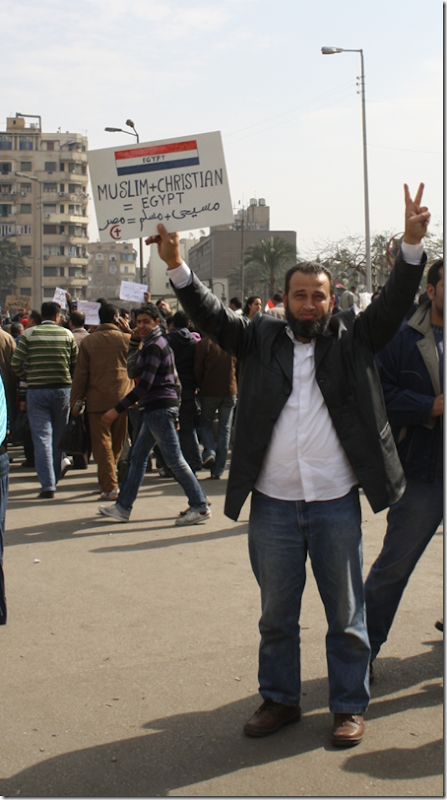 While many may look at the idea of Muslims and Christians living peacefully side-by-side with skepticism, the idea of peaceful dialogue between the two is revolutionary. It's what those in the church with a heart for Muslims have prayed for for centuries.

Twenty-five years ago Communism was the great enemy of Christianity. It was predicted that it would be the system that ushered in the Anti-christ. But on November 9, 1989, the Berlin Wall, that great divider protecting the West from its Eastern enemy fell quite unexpectedly. This opened up the way for one of the greatest (and under-reported) church planting movements Russia and Eastern Europe has ever witnessed. Could it be that the way for the same kind of movement in the Middle East is being cleared? Join me in praying that it is; that this could happen in our generation.