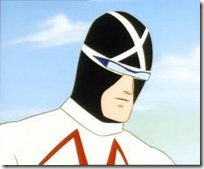 The Charming and Beautiful Susan noticed that all our friends were uploading childhood cartoon characters as profile pictures on Facebook. This was happening in real time this morning as she checked up on friends. It’s fun to watch something go viral right in front of you. So the question is why. Why are people doing this?

Here’s the back story:

The Rugrats. Strawberry Shortcake. Jem and the Holograms. Mickey Mouse.

If cartoon characters are starting to replace your Facebook friends, take comfort. You're not alone.

The latest fad to go viral on the social networking site has users changing their profile pictures to images of their favorite childhood cartoon characters.

And judging from today's Google trends and Twitter traffic, Facebook users across the site are enjoying the animated walk down memory lane.

On Facebook, images of the Flintstones, Thundercats, the Smurfs and other classic cartoon characters are taking over users' news feeds.

According to the trend-tracking website Know Your Meme, the cartoon fad started with Facebook users in Greece and Cyprus in mid-November.

Cartoon Message Says Campaign Is to Stop Violence Against Children

The site said the original message was in Greek and translated to "From the 16th to the 20th of November, we shall change our profile pictures to our favourite cartoon characters. The purpose of this game is to remove all photos of human for a few days from Facebook."

On November 19, All Facebook noticed a slightly different cartoon message sweeping the site.

"NewGame: Change your profile picture to your favorite cartoon from when you were a kid. The goal of this game is not to see a human picture on Facebook, but an invasion of childhood memories until Monday. PLAY AND PASS ALONG!"

Messages posted today include a cause in the call to action.

"Change your facebook profile picture to a cartoon character from your childhood and invite your friends to do the same. Until Monday, Dec 6th of 2010, there should be no human faces on facebook, but an invasion of memories! This is for a campaign against violence on children."

The origin of this latest message is murky, but, as with most Facebook memes, that isn't stopping Facebook users from joining the online movement. read the rest of the story...

Child abuse, as many of you know, is close to our heart. Here’s a link to our story.