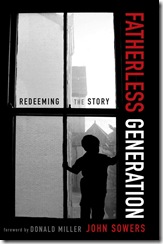 My family is under attack. So is yours. It's a concentrated spiritual effort designed to undermine our civilization's reliance, dependence, and turning to God. That's the conclusion you come to when you read Fatherless Generation by Dr. John Sowers. "No longer do we have to travel abroad to make war. America is making war on itself," Sowers writes.

Sowers is the national director of the Mentoring Project founded in Portland, Oregon, by New York Times bestselling author Donald Miller. Miller serves on the Task Force of Fatherhood and Healthy Families for Barack Obama.

The book is about fatherlessness. "Someone has determined your value and decided you are not worth having around - or that he would be better off someplace else, without you." Sowers words are wrenching. They evoke an emotional reaction in the reader. "The Bible makes it clear that there is one who hears and acts on behalf of those who have been abandoned, a Father who longs to father a rejected generation," Sowers writes.

Sowers' book gives the reader a sense that he's duty bound to do something.

Sowers divides the book into two parts. In the first part, Sowers tells the story of fatherlessness. "Rejection is the defining characteristic of the fatherless generation," he writes. The second part of the book is about redemption. Rejection becomes acceptance as Sowers makes heroes of the men who invest in the lives of fatherless boys. These are men who save lives.

Sowers wants men to know what it feels like to experience the gospel as a follower of Jesus. When men learn that living the gospel makes life interesting, they'll make life meaningful and interesting for the fatherless. They'll save souls as they redeem these cast off lives. It doesn't take a lot of money to live the meaningful life of a mentor. But it does take some will power to share your life with someone in need. And it will give an explanation for one's own past conflicts; a sense of meaning for one's history of pain.

Sowers peppers his book with excerpts from the fatherlessness embedded in culture around us. It exists in the lyrics of songs written by Linkin Park, Everclear, Filter, and Good Charlotte. Sowers invokes lines from Tyler Durden, the main character from the popular cult movie Fight Club. Our hero - who is also the narrator - has a split personality and asks his alter ego, "if you could fight anyone, who would you fight?"

"I'd fight my dad," our hero responds.

The fatherless generation is doing just that. Their expression of angst is rooted in an all out fight with fathers who've turned their backs on them.

Sowers book has an emphasis that is not only social, but has political and economic implications. "Our country is at a crossroads. If we continue to focus on the symptom - the rise of gangs and youth violence - we will miss the real problem, the reason why these gangs exist in the first place: absent fathers," writes Sowers.

In Fatherless Generation, Sowers quotes renowned worship leader Matt Redman who grew up without a father but had the benefit of many godly men who taught Matt to be a man. "In 1 Corinthians 4:15, Paul comments that the Corinthians have had many teachers in Christ - but not many fathers. I'm grateful that this has never been my experience. Though I grew up without a father, I was blessed with an abundance of older guys who invested into my life..."

If men step up and step in, prisons will shut down because less young men will end up there. Godly men mentoring the fatherless can turn a generation around.

This book is written to men who want to change their communities and a generation of fatherless boys. Whether you came from a home with or without a father, this book will have a deep and necessary impact. It takes about two and a half hours to read. This small investment of time could end up changing and fulfilling the life of a boy you know if you heed Sowers' call to action.