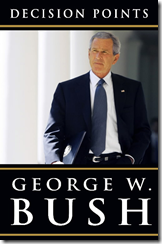 It's hard not to be fond of the George W. Bush written about by George W. Bush in his autobiography Decision Points. It's a narrative of his early life and presidency. He tells of swearing off alcohol so he could grow closer to " the Almighty." He gives us a look into the day fourteen year old George W. drives his mom to the hospital after she has a miscarriage. He remembers seeing the fetus in a jar. He writes about the famous walk on the beach he had with evangelist Billy Graham where questions about faith in Christ and the Bible are answered.

He tells of his father's honorable service in World War Two and, afterward, when his father and young bride moved to New Haven so he could attend Yale. It was during this time that George W. Bush was born.

There is no doubt that Bush has profound respect and a deep affection for his father George H.W. Bush. This is clear throughout the book. " ...the truth is that I never had to search for a role model. I was the son of George Bush." He writes of the emotional moment when they were both together in the Oval Office when the younger Bush first took office. "Neither of us said much. We didn't need to. The moment was more moving than either of us could have expressed."

The book often takes a defensive tone when Bush discusses his military service record or his political and judicial detractors.

Those who take an opposing view of Bush's policies in Iraq and Afghanistan will have a cynical response to Bush's recollection of history lessons at Yale. "I was appalled by the way the ideas that inspired the [French] Revolution were cast aside when all power was concentrated in the hands of a few," he wrote about the French Revolution. Of Stalin's purges of East Germany, Bush told of a lecture by Wolfgang Leonard. "[I]n his thick German accent he described the show trials, mass arrests, and widespread deprivations. " One can't help thinking about what Iraqis have experienced during their own violent transition from Saddam Hussein's Iraq to the Iraq we see on the nightly news. Readers of this book may come away thinking Bush has a blurred view of history. It hurts his case when he writes things like, "After the successful liberation of Afghanistan...," in the past tense when, to date, we're still involved in regular military actions in this conflict that's lasted longer than any other in American history.

Bush writes his book out of a sense of obligation to give his perspective of his two terms of service as the forty-third president of the United States. Despite its casual tone, the book is full of surprises. He gives the inside scoop on behind the scenes politics. Bush describes Dick Cheney as a likeable guy while the press characterized Cheney as Darth Vader incarnate. His public persona almost caused Bush to dump him from the 2004 presidential ticket. Senate majority leader Bill Frist was the considered replacement.

Bush is relaxed as he discusses 9/11 and staffing the Whitehouse, enhanced interrogation techniques, and many other issues that became the memorable events of his presidency.

Early in the book, Bush laments that his political rivals in Texas paint him as an East Coast outsider. Despite his East Coast roots and privilege, Bush leaves the reader with no doubt about his love for Texas. And Bush does his best to portray himself as just a "regular guy."

John McCain, Bush writes, used similar tactics in his run against Bush for the Republican candidate nomination in 2000. "McCain, a member of congress since 1983, had managed to define himself as an outsider and me as an insider." The tactic worked for McCain in the New Hampshire primaries and McCain is remembered by the public as a Bush rival ever since. McCain compared Bush's character to Bill Clinton's in that race, Bush reminds us. Bush also tells of his surprise when McCain suspended his presidential campaign in 2008 to attend a Whitehouse meeting and help rescue the failing economy. Bush lets us know that he and McCain are friends and barbeque buddies through all of their spirited, political ups and downs.

Search "Bush book" on Amazon.com and several books written by various members of the Bush family, including their dog, Millie, will turn up. For the past two decades, the entire Bush family has been churning out books about their lives and political exploits. Your love for George W. Bush will determine your level of enjoyment of Decision Points. If you love Bush, you'll love the book. If you hate Bush, this book will probably become an object in motion as Bush tells his side of the story. If you're indifferent, it's a good read, but you may want to pick it up at the library or wait until it hits the discount racks at your favorite bookseller.