Use it or lose it 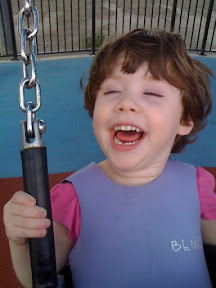 This is the last picture of Allie with teeth. We spent the day at the hospital today while Allie had oral surgery. A few weeks ago we took Allie in to see the dentist. Her teeth were getting bad despite regular brushing and very, very few sweets. Or so we thought. We shared a Starbucks brownie with Allie once every two months. That's it. But she takes medicines several times daily mixed in sweet syrup. We were also giving her rice milk.

It turns out that the real culprit is her diet of puried foods. Due to brain damage sustained from shaken baby syndrome, she does not have the motor capability to chew food. The result is soft, weak and decaying teeth.

The dentist we visited a couple of weeks ago examined and cleaned her teeth. Allie needed a ton of work done. But he said that her teeth were not as bad as he expected.

Since Allie has cerebral palsey, it's not practical to do the work the conventional way a section at a time. It's better to do all the work at once. For that, we were referred to a dentist that operates on kids while under anesthesia. He gets all the work done at once in under an hour while the kid is knocked out. Today was the day Allie had the work done.

Since our examining dentist said her teeth weren't as bad as he expected, you can imagine our shock when the nurse came out of the operating room to inform us that four of Allie's top front teeth had to be pulled and eight of her teeth had to he crowned. That leaves her with a tiny row of six of her own teeth in the front on the bottom and two canines on the top. The back of her mouth is filled with silver. The front top is all gums until her permanent teeth come in.

It was heartbreaking to see her when they allowed me back into the recovery room. Her mouth and nose were bloody and she was wailing. But she stopped almost instantly when I scooped her up and held her closely to my chest.

God designed our bodies wonderfully. In our mothers' wombs he knit us together the psalmist David wrote. Using what God gives us makes us stronger, fit and correctly formed. When what we have is not used or is rendered nonfunctional, we are in danger of losing it. This is something we learned a year ago when Allie had to have hip surgery. Hip sockets are formed while the child learns to waddle then walk then run. If legs are not used, their growth is stunted; deformed.

Use it or lose it. That used to be cliche. Now it's sad reality.

Or is God using this to strengthen other things in us; areas of our minds and bodies that would be neglected if life were "normal" or easy. I can see areas of Allie's life being strong where the same areas in my life are neglected and atrophied.

Use it or lose it.


- Posted from my iPhone with BlogPress

You're ideology is correct. Being a parent of a disabled child, although there are many weaknesses, I definitely see strengths that others his age do not have and probably never will! Children are resilient. She will figure out a way to function with her disabilities. You and Susan are great parents! I am still sooo sorry for this tragedy in your life. "My power is made perfect in weakness. Therefor, I will boast in my weaknesses. So, that the power of Christ may be made perfect in me."

Oh, my. Shaking a baby as Allie was shaken has so terribly many ramifications. (Bad phrasing, but....) I would never have made all the connections that keep coming up.

Thanks for continuing to blog about Allie's young life--and yours and Susan's, with her. My heart is still sad for her, for all of you; yet, I know that nothing is wasted with God, who redeems every part of our lives that we will give over to Him. He has given Allie gifts that will be made more evident as time goes on.

Wow. Its amazing that you are the ones going through this and I am the one being encouraged by your words instead of the other way around.