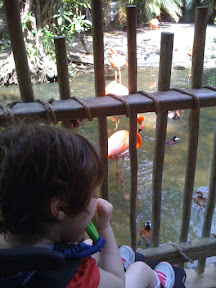 I expected to have a dreadful weekend.

This past Tuesday Allie had a follow up operation on her hips. Last year she had corrective surgery on her hips that involved breaking and repositioning her right and left femurs. Hardware was installed to reinforce the new position of her bones. This week, that hardware was removed.

Allie also had her muscles lengthened as part of the hip surgery last year. Her adductors, hamstrings, and Achilles were all lengthened which involves slicing the muscles and then setting the legs in a cast in a position where the muscles would heal stretched. It's pretty radical surgery. Allie was in a cast shaped like an "A" frame for six weeks. She incurred two serious infections. Her scheduled 3 day hospital stay stretched into 8 days. And she was in more pain when the cast was cut off than she was in six weeks of wearing it. It was a brutal three month ordeal.

So we looked forward to this week with dread for quite some time. Allie's adductors (the muscles used to open her legs) once again needed to be lengthened. Once again Allie has incisions in her hips and groin. And today is her fourth birthday. We didn't schedule any festivities because we didn't think she'd be ready for it.

But we were wrong. Allie is recovering amazingly well. She is a phenomenal little kid. She has stitches where she was sliced and had screws and clamps removed. But if you were to ask her, she'd tell you it was no big deal. Three weeks ago she had outpatient oral surgery that was much more traumatic for her.

We should have scheduled a birthday party. But hospital stays always bring such a cloud of gloom into our lives that we never consider hopeful possibilities. Thankfully, Allie doesn't think that way. She's inclined to be happy regardless. I get so caught up in feeling sorry for her (and for me) that I forget to expect God to do the unexpected. But maybe Allie remembers and maybe I need to learn a lesson from her.

- Posted from my iPhone with BlogPress