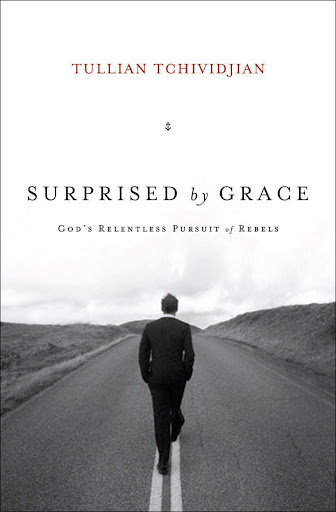 Tullian Tchividjian brings fresh perspective to the Old Testament story of Jonah in his new book Surprised by Grace; God's Relentless Pursuit of Rebels. The book is scheduled for release on May 31, 2010 by Crossway.

The central character in Tchividjian's book is Jonah the prophet. The story does not begin with Jonah as a hero nor does it end that way. In fact, the Jonah's story ends rather abruptly as Tchividjian points out a little more than half-way through his book. Jonah is a runner and a complainer. Jonah has the right religion and proper politics; he serves the true God and hates the worst sinners. But, as Tchividjian so skillfully explains, Jonah needs the gospel. “He sounds like a lot of people in the church… despite his pedigree and profile, Jonah’s still running from God. His morality and correct religion have brought him no closer to God…”

Tchividjian argues compellingly. He shows that the rule keepers need the gospel just as badly as the rule breakers. The reader learns that Jonah is good at being religious and knows it and expects God to move on his behalf because of it. Like the older brother in the Parable of the Prodigal Son (another "rule keeper"), Jonah is baffled that God would show such compassion to such horrible sinners. Tchividjian skillfully links the Old Testament narrative of Jonah to New Testament principles of grace and new beginnings.

Why is God so persistent about Jonah seeing this assignment through to its conclusion? Why doesn't God employ someone more willing and more passionate about the souls of sinners? Tchividjian explains that God pursues religious "rule keepers" with grace. He pursues them even if it hurts.

“The fish’s belly was not Jonah’s prison or death chamber," explains Tchividjian, "but only a temporary hospital for his soul and a protection for his body from the ocean depths. It’s good for Jonah to be here. God ensures that his unworthy servant is made fully aware of this undeserved deliverance.” God is much more interested in the person than the project. We think we're replaceable, but God makes it obvious that Jonah is the project.

Tchividjian includes plates from world renowned artists, samples from Raphael, Dennis McGeary, Phillip Ratner, and Salvador Dali, to name a few. The works of art displayed in the books pages are incredible visual aids for the reader. Jonah thrown overboard and then swallowed to stew in the digestive system of a large fish are horrors that defy description. With great talent, the artists illustrate their disgust as Tchividjian vividly contrasts it against the backdrop of God's grace. "As a storied presentation of the gospel, it especially reveals the expansiveness of three things - our sin, God's grace, and God's mission. There's nothing small about any of them."

This book is written for any of us that tend to minimize these three. I can't decide which is worst to minimize; my sin, God's grace or God's mission. Your eyes will be opened to corners of the Jonah story that will look familiarly like dark corners of your own heart. You'll lie awake at night comparing your heart to Jonah's.

It’s interesting that God doesn’t hold grudges against Jonah, but Jonah begrudges everything and everyone including God. A worldly boss would simply replace Jonah. Why doesn’t God?

"Once God rescues sinners, his plan isn’t to steer them beyond the gospel but to move them more deeply into it.”

Read the review in the Good News of South Florida