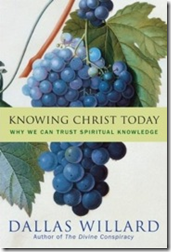 The universe hangs on the Word of God but knowledge of God is not treated as a credible by contemporary scholars and educators. What can actually be known about God is not even given passing consideration but off-handedly and unfairly relegated to education ghettos by those responsible for educating about what is real and knowable.

"In practical terms, reality is what you rely on... Mistakes about reality lead to brutal encounters with it. Illusion, a mistake about what is real, is what will let you down, what you cannot count on. Knowledge of reality tends toward successful and confident interactions with reality," writes author Dallas Willard. "The double minded person is someone with a reality problem."

"[Atheists] literally do not know what they are talking about when it comes to knowing Christ as a life that some people actually live. They have not taken the trouble to understand even what they could know as 'outsiders' by sympathetically studying the lives of the great 'insiders,'" says Willard.

"'Ask, and it will be given to you; seek, and you will find; knock, and the door will be opened to you. For everyone who asks receives, and everyone who searches finds, and for everyone who knocks the door will be opened' (Matt. 7:7-8). If, after some serious effort, you find that this is 'not working' for you, stand back and reflect on what part of what you are seeking is not really wanted or what part of you does not want God's way."

Willard challenges those with the most serious responsibility of teaching about God and reality. "Pastor - spokespeople for Christ - must first of all have knowledge of the truth and reality they communicate to others. They must do whatever is necessary to gain that knowledge. It is not enough that they be trained to function well within a certain brand of Christianity - to be successful in that context. Their field is real life under God."

Willard's argument is strong. At first, as Willard lays his foundation, I had to read and re-read. I wasn't sure where he was going. He uses terms like "pluralism." This is taboo in the conservative circles of Christianity I learned doctrine in. But guys with a bare-bones education like mine need to hang in there and try to grasp what Willard is saying; it's important to get it. Christian pluralism is: "...a pluralism based on the generosity and justice of the God revealed in Christ," he writes. It doesn't mean that everyone agrees with everyone else's religion. That's ideologically and psychologically impossible. It's also important to say that it isn't unloving or arrogant to disagree with someone that is genuinely wrong. In fact, it is often important for someone who is right to disagree with someone who is wrong and then -lovingly- help him or her correct the error. It would be immoral, in most cases, not to.

Christian pluralism is accepting those we disagree with as neighbors and living them as ourselves.

This is not light reading. But it is excellent reading. For me, it was reading over my head, but it's worth the effort. This is how you grow.