Ryan Gunn is currently my favorite blogger. He's doing an awesome job of keeping everyone at home updated about his trip to Cambodia. 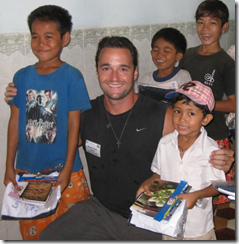 DAY 10 – Friday began with another 10 ton rice distribution and medical clinic. Seeing so many sick people - especially children – is depressing. As we continue to move north in Cambodia we are seeing more and more amputees. The northern border of Cambodia is littered with landmines from past wars. Pol Pot’s region is especially bad. After his Khmer Rouge was overthrown, Pol Pot turned his territory into a landmine field so no one could get in or out. Unfortunately, these countless mines are still active. I’ll have much more on this as we get into mine territory later in the trip.

The highlight of Friday took place in the afternoon when we visited an orphanage and gave away 100 school uniforms. The recipients were between the ages of 7 and 14 and HAD NEVER BEEN TO SCHOOL BEFORE because their parents couldn’t afford a uniform. Knowing that these 100 kids will begin their education is awesome!

The orphanage where the uniform handout took place is called Hope For Cambodia. Most of its kids were abandoned by their parents (some lost parents to death). The orphanage, which keeps children until they turn 18 or graduate college, gives the kids a positive and safe environment. Hope For Cambodia is supported by United States Churches through Pathway To Hope. Each child is raised in a Christian environment which includes Bible studies each morning and evening.

Have a blessed weekend!

Looks like they're doing great work! Reading about those landmines reminds me of Princess Di and her determination to get rid of them. But Princess Di is gone, instead. Is anyone, anywhere, working toward the elimination of the mines? Not that I have any clue as to how that could be done, safely.