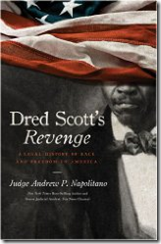 Our Heroes and Their Prejudice

I'm deeply convicted that I wouldn't normally buy a book like this. I chose to review for Thomas Nelson Publishers and I'm glad I did. I learned much and I unlearned more.

I thought the terms "states rights" vs. "federal interventionism" were current political rhetoric. I always thought that this was current liberal vs. conservative (liberal being "federal interventionism" or "big government" and "states rights" being conservative). But this is the political language of slave owners "rights" vs. big abolitionist government. And when the an administration didn't want to step in and do the right thing concerning civil rights from Lincoln right up through JFK, they laid responsibility on the states. And many states, as we all know from fairly recent history, and one set of laws for white men, and separate codes for black.

I prejudged this book since I've seen Judge Napolitano often on Fox News. I expected this book to be the same kind of non-news propaganda pumped out by Fox News. But I found that Napolitano was more fair as an author than I am as a reader. Napolitano pulls no punches in this book. He gives the straight scoop on many of our political heroes. Men we've built monuments to and close banks and schools for were less pure than our school books portray. Napolitano is not cynical or unpatriotic, in fact, he is quite patriotic and just in his exposé of the double standard this country has governed by since its inception. Justice and reconciliation demand that one tells the truth about one's shortcomings. Our greatest sins cannot be swept under the carpet for the greater good. No good can come from wrongs glossed over, or worse, spun into something more palatable for mass consumption. Napolitano does his work well.

This book covers the topic of slavery, war, and the catastrophic consequences visited on every generation of Americans since our country's founding.

Napolitano demonstrates that the New World was founded and built on slavery. Christopher Columbus comments to his sponsors: "From here one might send, in the name of the Holy Trinity, as many slaves as could be sold."

Commonly accepted as a part of early (even current, occasionally) American Theology is "that God or nature selected the black race to do the labor in the harsh conditions of the Southern climate."

"The federal fugitive slave law allowed a master to claim a runaway slave even if he were found in a free state."

"President Andrew Jackson once offered a $50 reward for the capture of his fugitive slave and $10 extra for every hundred lashes any person would give the slave to the amount of $300."

Federally sponsored and/or permitted racism existed even in my lifetime both in the civilian and military realms. It's hard to believe that a black man was elected to the presidency in my lifetime. It demonstrates that there is hope for real race reconciliation in this country if people are willing to not be passive and vindictive.

I don't have room to get into what you will learn about the Great Emancipator Abraham Lincoln. Napolitano does the research and unearthed the documents punching holes in that rosy portrait.

I have to say again how impressed I was with the authors objectivity and balance. He had the opportunity to push other agendas and restrained himself. I was pleasantly surprised.

When you read the book (and you should), read the notes, acknowledgements and bibliography. Those, too, are impressive and thorough.