Book Review: The Hole in Our Gospel 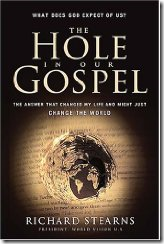 The Hole in Our Gospel analyzes modern Christendom's commitment to the whole gospel. "More and more, our view of the gospel has been narrowed to a simple transaction, marked by checking a box on a bingo card at some prayer breakfast, registering a decision for Christ, or coming forward during an altar call," says author Richard Stearns, director of World Vision. Stearns strongly believes that our twenty-first century, suburban gospel needs an overhaul.

Heeding the gospel, according to Stearns, means that God's Kingdom is breaking through to earth in the here and now. "If your personal faith in Christ has no positive outward expression, then your faith - and mine - has a hole in it."

Most Christians treat the gospel as fire insurance; it's a switching mechanism for re-routing as many hell-bound souls as possible to heaven. The afterlife is the ultimate priority. Life here and now matters little, so Christians make minimal difference in the world beyond their neighborhoods' cul-de-sacs.

Stearns challenges that idea. He reminds us that we'll be judged in the afterlife for our treatment of people in this life. "...focusing almost exclusively on the afterlife reduces the importance of what God expects of us in this life. The kingdom of God, which Christ said is 'within you' (Luke 17:21 NKJV), was intended to change and challenge everything in our fallen world in the here and now. It was not meant to be a way to leave the world but rather the means to actually redeem it."

Early in the book Stearns draws the reader into the discussion Jesus had with religious leaders in Matthew 22.

"Teacher, which is the greatest commandment in the Law?" a Pharisee asks.

Stearns posits that the third greatest commandment is introduced in Matthew 28: make disciples. He calls Matthew 28 a "bookend to the momentous announcement in Luke 4 that Christ came to preach the good news to the poor, restore sight to the blind, release captives, and proclaim the year of the Lord's favor. But it is more than a call to proclaim; it is a call to make disciples." Stearns bullets his points this way:

· We are to love our neighbors.

· We are to go and make disciples of others who will do the same.

Stearns argues that the church misunderstands and is misapplying the gospel. "What 'good news' have God's people brought to the world's three billion poor? What 'gospel' have millions of Africa's AIDS orphans seen?" Stearns supports his argument not just with statistics, but with a narrative of what he's touched and seen firsthand. He's visited cities like Rakai, Uganda, ground zero of Uganda's AIDS pandemic. He's sat with boys like Richard, the thirteen-year old head of his household. In that city alone there are sixty thousand children orphaned by AIDS.

This book emphasizes faith transforming the life of the believer in a way that the world around the believer changes as the believer is changed. "Light dispels darkness; it reverses it."

At first glance, it seems that Stearns falls too far on the side of a "social gospel." But Stearns makes the case that true faith will produce deeds that collide with despair, not apathy that colludes with ignorance and spiritual impotence. "The whole gospel is a vision for ushering in God's kingdom - now, not in some future time, and here, on earth, not in some distant heaven," Stearns writes.

This book is intended for anyone who says that a personal relationship with Jesus is meant to be private. The one that evaluates faith by putting check marks in the proper theological boxes especially needs to read this book. It's Stearns fervent hope that those readers will come to the conclusion he came to: "...if Jesus was willing to die for this troubled planet, maybe I need to care about it too. Maybe I should love the people who live on it more. Maybe I have a responsibility to do my part to love the world that Jesus loves so much."

Richard Stearns, president of World Vision U.S., was named to President Barack Obama’s new Advisory Council on Faith-Based and Neighborhood Partnerships. The council is composed of religious and secular leaders and scholars from different backgrounds.

Sounds like more of a recap than a review. What did you think of the book?

This book is a tired motif: Yet another person saying how contemporary Christianity & how it is currently being expressed is incomplete. My personal opinion is that since the birth of Christianity, we have struggled to have a theology & worldview that encompasses ALL the great ideals taught in the New Testament. And how could we- it's quite the challenge.

Thanks for the comments; loved the book. Great feedback. This review reads like this because it was written for a newspaper column I do but I forgot to mention it.

Take Two: familiar motif; true. Not everybody has struggled to have a theology and worldview that is all-encompassing. We, as the church, find reasons and allow distractions into our lives that prevent us from doing what we've been instructed. We've created theology to excuse ourselves from doing what we've been called to do. Every generation struggles with this and every generation must rise to the occasion. Wouldn't it be nice if THAT was familiar?