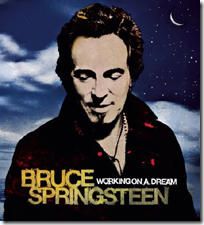 The Boss knows how to market an album:

I love Springsteen's work, but I wonder if this album will live up to the hype. No doubt it will sell well, but Born to Run this album is not. Sometimes I need to almost wear a record out before I really start to like it. But by then my wife really hates it.

Outlaw Pete: Haunting. Spaghetti Western. Ballad. These words come to mind to describe this song. There's a chunk of the tune that reminds me of a line in an old Kiss song (I was made for loving you, baby, you were made for loving me...). I listened to this song while running on the treadmill this morning and I ran a mile before it was over. I'm not that fast so believe me when I say that this is a really long song. Kind of the way The Good, the Bad, and the Ugly is a really long movie.

Working on a Dream: If you liked the pop sound of Bruce's last release, Magic, then you'll like this tune.

Queen of the Supermarket: I read the lyrics to this song and thought, "what the heck?" The song is about a guy that has a crush on a girl that works at the local Piggly-Wiggly. About as romantic as a mop-up in the dairy department. But it's actually a decent song when combined with music. I guess  that's the idea. Bruce drops an "F" bomb in the last verse making the CD PG13. I don't get why that was necessary. Maybe I'm more of a prude that I thought.

What Love Can Do: Decent but forgettable.

This Life: Reminds me of the Beatles of whom I am not a fan.

Good Eye: Bluesy. New Orleanzy. Killer harmonica that sounds like it's coming through an amplifier with tubes still warming up. Remember those? Springsteen blow's a mean harmonica.

Tomorrow Never Knows: This track has an old timey country music feel. The violin accompaniment will grow on you. If it doesn't, don't worry; it's a pretty short track at 2:14.

Life Itself: Reminds me of The River. Read the words when you listen to this one and you'll enjoy it more. You'll wish you wrote it.

Surprise, Surprise: The Monkees could have written this one. I would have been beaten up in high school for playing this track or anything by Leif Garret or Shawn Cassidy or any other Teen Beat band.

The Last Carnival: Interesting but forgettable.

The Wrestler: This is on the soundtrack of the movie with the same title released earlier this month. This is a cool song; one that every listener will be able to identify with when having a particularly crummy day. Springsteen definitely has a talent for eloquently reproducing a bad mood.

Technorati Tags: Springsteen,Working on a Dream
Posted by Bryonm at 9:20 PM

I need to get that on itunes asap. This blog is making me want to listen to Springsteen right now.