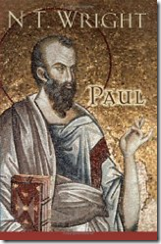 Wright sheds light on Paul and his theology that has stood off in dark shadows cast by church tradition.

Wright takes the reader on a journey through major Pauline themes, the way Paul thought, and his theology. It's not a quick trip. At least, for me it wasn't. The book is quite technical requiring a re-reading of several sections.

Wright is a controversial guy. I don't think he intends to do anything but educate, but in the process he knocks over a few theological sacred cows. The biggest debate is taking place within American Presbyterianism where one camp views Wright as incredibly edifying to the Body of Christ while another camp views Wright as dangerous to all holy thinking.

The controversy revolves around Wright's view of Justification. He argues that scripture declares that Justification is the way into God's family; it's proof that you are in. Justification is God's declaration that you are, in fact, part of His covenant family. This view undermines the traditional Reformed doctrine of imputation; at least the Calvinist tradition that is most popular in the U.S.

The book is divided into two parts: Themes and Structures. In the first part, Wright handles Creation and Covenant, Messiah and Apocalyptic, and Gospel and Empire. The second part examines Monotheism, Election, Eschatology, and concludes with the task of the church.

As always, Wright engages the reader with a compelling argument. But as I stated above, it is technical requiring slow, thoughtful reading. The book does not provide bullet points, flow charts, or cartoons. The text is adapted from the Hulsean Lectures in Cambridge University. I'm glad I had this in print form to work through rather than having to try to keep up with a lecture given at Cambridge.

An historical and theological quest is emphasized by Wright rather than merely examining Paul and his teachings in the light of one traditional view or another.

Many would say that Wright's perspective is out of balance; that examining Paul in a historical Jewish context is a mistake. His answer to that: "...we end up reading him as though [Paul] was really a 17th-century theologian born out of due time..." Wright posits that most of what we accept about Paul is based on scholarship that has been delivered to the world since the Reformation. But Paul pre-dates the Reformation.

I am speaking for myself.

Presbyterians believe in Justification. They just believe that it happens at the moment of conversion. I could be wrong, but what I've read about N.T. Wright says that he thinks that justification happens at the Day of Judgment, instead of at the moment of conversion. That would be the only difference between a Presbyterian viewpoint and Wright's...although I think that most of the evangelical world believes the same thing that Presbyterians do on justification, including imputed righteousness of Christ through substitutionary atonement.