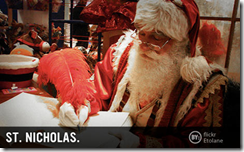 Who was Saint Nick?

Nicholas was born in the third century in Patara, a village in what is now Turkey. He was born into an affluent family, but his parents died tragically when he was quite young. His parents had raised him to be a devout Christian, which led him to spend his great inheritance on helping the poor, especially children. He was known to frequently give gifts to children, sometimes even hanging socks filled with treats and gifts.

Perhaps his most famous act of kindness was helping three sisters. Because their family was too poor to pay for their wedding dowry, three young Christian women were facing a life of prostitution until Nicholas paid their dowry, thereby saving them from a horrible life of sexual slavery.

Nicholas grew to be a well-loved Christian leader and was eventually voted the Bishop of Myra, a port city that the apostle Paul had previously visited (Acts 27:5-6). Nicholas reportedly also traveled to the legendary Council of Nicea, where he helped defend the deity of Jesus Christ in AD 325.

Following his death on December 6, 343, he was canonized as a Saint. The anniversary of his death became the St. Nicholas holiday when gifts were given in his memory. He remained a very popular saint among Catholic and Orthodox Christians, with some 2,000 churches named after him. The holiday in his honor eventually merged with Christmas as they were celebrated within weeks of one another.

During the Reformation, however, Nicholas fell out of favor with Protestants, who did not approve of canonizing certain people as saints and venerating them with holidays. His holiday was not celebrated in any Protestant country except Holland, where his legend as Sinterklass lived on. In Germany, Martin Luther replaced him with the Christ child as the object of holiday celebration, or, in German, Christkindl. Over time, the celebration of the Christ child was simply pronounced Kriss Kingle and oddly became just another name for Santa Claus.

The legends about Santa Claus are most likely a compilation of other folklore. For example, there was a myth in Nicholas’ day that a demon was entering people's homes to terrorize children and that Nicholas cast it out of a home. This myth may explain why it was eventually believed that he came down people's chimneys.

Also, there was a Siberian myth (near the North Pole) that a holy man, or shaman, entered people's homes through their chimneys to leave them mushrooms as gifts. According to the legend, he would hang them in front of the fire to dry. Reindeer would reportedly eat them and become intoxicated. This may have started the myth that the reindeer could fly, as it was believed that the shaman could also fly. This myth may have merged with the Santa Claus myth and if so, explains him traveling from the North Pole to come down the chimney and leave presents on the mantle over the fireplace before flying away with reindeer.

These stories of Santa Claus were first brought to America by Dutch immigrants. In the early 20th century, stores began having Santa Claus present for children during the Christmas season. Children also began sending letters to the North Pole as the legends surrounding an otherwise simple Christian man grew.