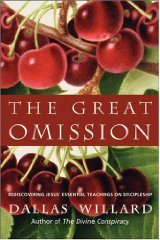 We are so concerned that Jesus be known as the Savior that we forget that He is the Greatest Teacher. Unfortunately, liberal scholars who are quick to deny that Jesus is God concede that He was a great teacher. Believers in Biblical fundamentals over the past 100 hundred years have distanced themselves from liberal scholarship, as they should, but have also distanced themselves from Jesus the Teacher only making Him known as God. But He is the Teacher who will teach us how to live this life and provide a way for the Kingdom of God to invade the earth.

One of Willard’s main points is that grace is opposed to earning, not effort.

Willard makes a compelling argument for the value and necessity of disciple making in church rather than church centric member molding and holding.

This book is intended for church leaders and influencers. The last thing Jesus told His followers to do is to make disciples. Willard writes that the word disciple appears 269 times in the New Testament while the word Christian only appears three. But the modern day (or post-modern, if you prefer) church focuses on making Christians rather than disciples.

A disciple is not a Christian version 2.0; it’s not a Christian with upgrades. Disciples are all we read about in the Acts and the Epistles. Not merely converts postponing living in the presence of Christ until the life here after, but students of the Greatest Teacher ever in the here and now who understand that living in the presence of Christ happens now. Doing what Christ did doesn’t earn us heaven; it gets us ready for it. “Not to earn it, but to know it. And, of course, finding the Kingdom of God is living the rule and reign of God in our lives,” writes Willard.

This book will be used as a text book for practical disciple making. Pick it up if you’re interested in obeying the Great Commission.

Interesting. I agree that the Christian Church has historically presented a very narrow view of Jesus. Most evangelicals I've known--and I've known a bunch, having been raised in the tradition--have not been at all comfortable with seeing Jesus as a human male, but only as God. If He wasn't Man, also, then He must not have faced and overcome the usual kinds of temptations known to men (being gender-specific, here).

Most of the emphasis I've heard in the past on Jesus as Teacher was on what He said, rather than on what He did: how he developed and managed His relationships, for instance.

Anyway, it does sound like an interesting book. And did I miss your review of your other book for TN? I think it was The Truth About You. I'm still waiting for my second book, which has been backordered.

I'm still waiting for that book...

Ahh--got it. And here I'd been mildly envious because you had another book to read and review. See? Envy gets us nowhere! The title you're waiting on sounds interesting.